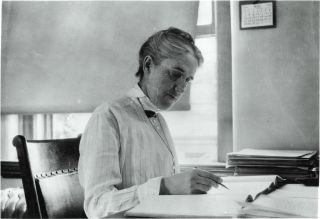 Henrietta Swan Leavitt discovered a relationship between the period of a star's brightness cycle to its absolute magnitude. The discovery made it possible to calculate their distance from Earth;
(Image: © Harvard-Smithsonian Center for Astrophysics )

Henrietta Swan Leavitt was a Harvard "computer" — one of several women in the early 1900s who studied photographic plates for fundamental properties of stars. Leavitt is best known for discovering about 2,400 variable stars between 1907 and 1921 (when she died).

She discovered that some of these stars have a consistent brightness no matter where they are located, making these so-called Cepheid variables a good measuring stick for astronomical distances. Her work helped American astronomer Edwin Hubble measure galaxy distances in the 1920s, which led to his realization that the universe is expanding.

Leavitt was born on July 4, 1868, and was educated at both Oberlin College and the Harvard-affiliated Radcliffe College (then known as the Society for the Collegiate Instruction of Women, according to Britannica.) She became a volunteer assistant at the Harvard College Observatory and was subsequently employed in 1907 (according to Harvard) under director Edward Charles Pickering, who hired dozens of females during his decades-long tenure at the observatory.

While Pickering's effort was noteworthy for an era where few women worked outside the house, the work he hired them for – analyzing photographic plates – was long and tedious, and the pay was cheaper than what a man would have been offered. Leavitt was put to work analyzing the brightness of stars using the plates; to do comparisons, she would often overlay one plate on top of another to see how the star had changed its brightness between exposures.

It was while Leavitt did this work that she discovered that some stars have a consistent brightness no matter where they are located – making it easy to figure out their distance from Earth. Instead of offering wild estimates for how far objects were from us, it was now possible to more precisely measure their distances. Leavitt had become, in the words of George Johnson, author of the book "Miss Leavitt's Stars" (Norton, 2006), "the woman who discovered how to measure the Universe," according to a biography of her by the American Association of Variable Star Observers (AAVSO).

Leavitt, however, reportedly received little credit for her work at the time. Pickering published what she had found, but used his own name for the work, AAVSO said; Leavitt was mentioned only as the person who had prepared the information. A few years later, the new director Harlow Shapley used Leavitt's work to figure out distances around the Milky Way, and didn't give Leavitt a lot of credit, AAVSO added.

"Little is known of Henrietta Leavitt's personal feelings about the way she had been overstepped," AAVSO wrote. "Hers was a shy and somewhat unassuming personality, and women at that time, even highly educated and brilliantly talented women who in a fairer world would have been respected as equals by their male peers, were all too often resigned to taking a lesser role, and were often just quietly grateful to be given any sort of role at all."

Leavitt died in 1921 as a mostly unknown astronomer, something that several biographies are working to correct today. After her death, her findings soon sparked a new understanding of the universe. Besides the work performed by Shapley, another American astronomer, Edwin Hubble, used Leavitt's information to help him understand the distance to the nearest large galaxy to Earth, known as the Andromeda Galaxy (more officially known as M31).

Andromeda's distance of 2.5 million light-years was established in the 1920s using Cepheid variables, making it clear the galaxy was far outside the boundaries of the Milky Way. In other words, Hubble determined that there were other galaxies like our own in the universe. Subsequently, Hubble figured out that the universe was expanding by measuring the "redshift" of receding stars whose light was being pulled to the red side of the light spectrum.

"Leavitt's discovery was so important that in 1924, Gösta Mittag-Leffler of the Swedish Academy of Sciences tried to nominate her for the Nobel Prize," an article in Air and Space Smithsonian stated. "Unfortunately, Henrietta died of cancer three years before this, and the Nobel Prize is not awarded posthumously."

Cepheid variables are still used today to help us understand the distance to astronomical objects. As astrophotography techniques continue to improve, these distances are refined. A famous example took place in 2012, when it was revealed that the North Star Polaris – a nearby Cepheid variable — is about 100 light-years to Earth closer than thought.