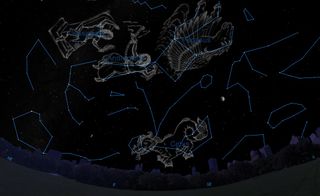 Step outside this week between 6 and 8 p.m. local time and look overhead and toward the south to see one of the landmarks of the mid-autumn sky: the Great Square of Pegasus, the flying horse.

The constellation is composed of three second-magnitude stars and one third-magnitude star (lower magnitudes are brighter). As H.A. Rey said in his classic star guide, "The Stars: A New Way to See Them" (Houghton Mifflin Harcourt, 2008), "Once you know it, you won't forget it — it's such a striking figure." In our era, planetarium lecturers enjoy pointing out the Great Square and demonstrating how it can be turned into a baseball diamond, an especially popular analogy right around World Series time.

Among the fall constellations, many of which consist of faint stars, Pegasus is one of the easiest patterns to trace out, because its stars form a pretty good representation of a trotting horse. The Great Square forms the horse's body. The star Enif marks his nose, and his front legs stretch out from the star Scheat at the upper right (northwest) corner of the square. [November Night Sky: What You Can See This Month (Maps)]

Unfortunately for those of us who live north of the equator, tracing Pegasus in the sky might get a bit confusing, because our horse appears upside down. But Pegasus is not the only inverted constellation. Another star pattern, the mighty Hercules, appears to us to be standing on his head as he passes overhead on balmy early summer evenings.

One might wonder what was going through the minds of the ancient stargazers to come up with such convoluted orientations for these star pictures. But for Hercules, we have a good explanation.

The early people who lived in the Middle East more than 5,000 years ago did not see the strong man standing upside down; in fact, he was steady on his two feet as seen from Mesopotamia. The reason is due to the wobbling motion of the Earth's axis, known as precession, which causes the axis to describe a circle in the sky over a span of nearly 26,000 years. So, five millennia ago, Earth's North Pole was not near the star Polaris as it is today, but close to the star Thuban in the constellation of Draco, the dragon. This shift means Hercules appeared right-side up around 3,000 B.C.

However,. we can't use this explanation for Pegasus; thousands of years ago, precessional shift pushed him even farther to the south than he is now, making him appear upside down from even more places on Earth.

The legend of Pegasus

And not only was his orientation odd when he was created, but he quite obviously represents a mythical beast: an equine sporting wings! The concept of a flying horse likely came from the Euphrates Valley, where Pegasus has been found on ancient tablets whose makers seemed enamored with composite human-and-beast and bird-and-beast figures. Pegasus has also been depicted on Greek coins minted in the fourth century B.C.

Most astronomy books tell us that the legend of Pegasus was born after the hero Perseus beheaded the gorgon Medusa and some drops of blood fell from her head into the sea, from which sprang our winged steed. This made Pegasus part of the supporting cast of the most famous celestial soap opera. That group also includes Cepheus, the king; Cassiopeia, the queen; Andromeda, the chained princess; Perseus, the hero; and Cetus, the whale.

There are quite a few variations of the story, but it appears that after Pegasus was born, Perseus mounted the horse and together they flew off toward Ethiopia, where they saw Andromeda, chained to a seacoast rock as Cetus approached to devour her. Like the charging cavalry, Perseus and Pegasus arrived just in a nick of time. Perseus held up Medusa's hideous head — covered in snakes for hair — for Cetus to gaze at, which instantly turned the sea monster to stone, while Perseus rescued his bride-to-be.

Not so happy ending

Pegasus was involved in other adventures, as well, though they're not often mentioned in the books. One particular tale that did not end up so well involved a youth named Bellerophon, who was assigned the unenviable task of slaying yet another of those mythical composite monsters, the Chimera. This beast possessed a lion's head, a goat's body and a dragon's tail. Bellerophon, a mere mortal, knew he was overmatched and spent an entire night in the temple of the goddess Minerva, praying for her help. The next morning, he awoke to find a golden bridle in his hand and Pegasus drinking from a nearby fountain. Bellerophon harnessed the majestic animal, and together they conquered the Chimera with relative ease.

That's where the story should have ended, but unfortunately, the defeat of the Chimera went to Bellerophon's head. After several more adventures with Pegasus, he became so presumptuous that he persuaded Pegasus to carry him up to the home of the gods, Mount Olympus, where he hoped to be accepted as one of them. The gods were utterly astounded at the young man's audacity, and as he and Pegasus approached the Olympian gates, Zeus (also known to the Romans as Jupiter) sent a gadfly to sting the winged horse, who subsequently bolted and threw his mortal rider.

Upon crashing back to Earth, Bellerophon, lamed and blinded by the fall, wandered miserably alone until his death. As for Pegasus, he was placed by Zeus among the stars, where he remains to this day.

An interesting postscript to this story: Napoleon Bonaparte, who rose to become emperor of France from 1804 to 1815, perhaps similarly thought he was more than mortal. In 1815, when Napoleon was exiled to the island of St. Helena, the British ship that brought him there was the HMS Bellerophon.