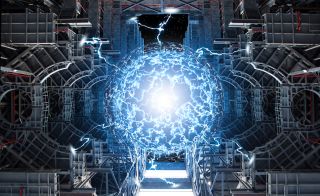 A private nuclear-fusion company has heated a plasma of hydrogen to 27 million degrees Fahrenheit  (15 million degrees Celsius)  in a new reactor for the first time — hotter than the core of the sun.

UK-based Tokamak Energy says the plasma test is a milestone on its quest to be the first in the world to produce commercial electricity from fusion power, possibly by 2030.

The company, which is named after the vacuum chamber that contains the fusion reaction inside powerful magnetic fields, announced the creation of the superhot plasma inside its experimental ST40 fusion reactor in early June.

The successful test – the highest plasma temperature achieved so far by Tokamak Energy – means the reactor will now be prepared next year for a test of an even hotter plasma, of more than 180 million degrees F (100 million degrees C).

That will put the ST40 reactor within the operating temperatures needed for controlled nuclear fusion; the company plans to build a further reactor by 2025 that will produce several megawatts of fusion power.

"It's been really exciting," Tokamak Energy co-founder David Kingham told Live Science. "It was very good to see the data coming through and being able to get the high-temperature plasmas — probably beyond what we were hoping for." [Science Fact or Fiction? The Plausibility of 10 Sci-Fi Concepts]

Tokamak Energy is one of several privately funded companies racing to create a working fusion reactor that can supply electricity to the grid, perhaps years before the mid-2040s, when the ITER fusion reactor project in France is expected to even achieve its "first plasma."

It could be another decade after that before the experimental ITER reactor is ready to create sustained nuclear fusion — and even then, the reaction will not be used to generate any electricity.

Star in a jar

The nuclear fusion of hydrogen into the heavier element helium is the main nuclear reaction that keeps our sun and other stars burning for billions of years — which is why a fusion reactor is sometimes likened to a "star in a jar."

Nuclear fusion also takes place inside powerful thermonuclear weapons, also known as hydrogen bombs, where hydrogen is heated to fusion temperatures by plutonium fission devices, resulting in an explosion hundreds or thousands of times more powerful than a fission bomb.

Earthbound controlled fusion projects like ITER and the Tokamak Energy reactors will also fuse hydrogen fuel, but at much higher temperatures and lower pressures than exist inside the sun.

"Fifty kilograms [110 lbs.] of tritium and 33 kilograms [73 lbs.] of deuterium would produce a gigawatt of electricity for a year," while the amount of heavy hydrogen fuel in the reactor at any one time would be only a few grams, Kingham said.

That’s enough energy to power more than 700,000 average American homes, according to figures from the US Energy Information Administration.

Existing nuclear-fission plants generate electricity without producing greenhouse gas emissions, but they are fueled by radioactive heavy elements like uranium and plutonium, and create highly radioactive waste that must be carefully handled and stored. [5 Everyday Things That Are Radioactive]

In theory, fusion reactors could produce far less radioactive waste than fission reactors, while their relatively small fuel needs mean that nuclear meltdowns like the Chernobyl disaster or Fukushima accident would be impossible, according to the ITER project.

However, veteran fusion researcher Daniel Jassby, who was once a physicist at Princeton Plasma Physics Laboratory, has warned that ITER and other proposed fusion reactors will still create significant amounts of radioactive waste.

The ST40 reactor and future reactors planned by Tokamak Energy use a compact spherical tokamak design, with an almost round vacuum chamber instead of the wider donut shape being used in the ITER reactor, Kingham said.

A critical advance was the use of high-temperature superconducting magnets to create the powerful magnetic fields needed to keep the superhot plasma from damaging the reactor walls, he said.

The 7-foot-tall (2.1 meters) electromagnets around the Tokamak Energy reactor were cooled by liquid helium to operate at minus 423.67 degrees F (minus 253.15 degrees C).

The use of advanced magnetic materials gave the Tokamak Energy reactor a significant advantage over the ITER reactor design, which would use power-hungry electromagnets cooled to a few degrees above absolute zero, Kingham said.

Other investment-funded fusion projects include reactors being developed General Fusion, based in British Colombia and TAE Technologies, based in California.

One of the most advanced privately funded fusion projects is the compact fusion reactor being developed by U.S.-based defense and aerospace giant Lockheed Martin at its Skunk Works engineering division in California.

The company says a 100-megawatt fusion reactor, capable of powering 100,000 homes, could be small enough to put on a truck trailer and be driven to wherever it is needed.