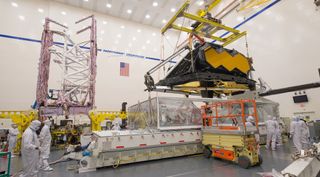 The optical element of NASA's James Webb Space Telescope is removed from a shipping container in a Northrup Grumman clean room in March. The Spacecraft element, including the folded-up sunshield, is at left prior to undergoing acoustic testing.
(Image: © Northrop Grumman)

WASHINGTON — As an independent review of NASA's James Webb Space Telescope continues, the project is dealing with a new problem discovered in recent testing of the spacecraft.

In a presentation at a meeting of the National Academies' Space Studies Board here May 3, Greg Robinson, the JWST program director at NASA Headquarters, said some "screws and washers" appear to have come off the spacecraft during recent environmental testing at a Northrop Grumman facility in Southern California.

Technicians found the items after the spacecraft element of JWST, which includes the bus and sunshield but not its optics and instruments, was moved last weekend from one chamber for acoustics tests to another to prepare for vibration testing. [Related: NASA Delays James Webb Space Telescope Launch to 2020]

"Right now we believe that all of this hardware — we're talking screws and washers here — come from the sunshield cover," he said. "We're looking at what this really means and what is the recovery plan." The problem, he said, was only a couple of days old, and he had few additional details about the problem.

"It's not terrible news, but it's not good news, either," he said.

The incident, Robinson argued, showed the importance of the wide range of tests the spacecraft is put through prior to launch. "That's why we do the testing," he said. "We do it now, we find it now, we fix it and we launch a good spacecraft."

This latest incident comes as an independent review board, chartered by NASA in late March after announcing a one-year delay in JWST's launch because of other technical issues, is in the midst of its analysis of the mission and its launch readiness. That review, led by retired aerospace executive and former NASA Goddard director Tom Young, is scheduled to be completed at the end of the month.

"It was a no-brainer to put an independent review board in place," Thomas Zurbuchen, NASA associate administrator for science, said at the Space Studies Board meeting May 2. The board, he said, will provide an independent look at the status of the mission and identify what needs to be done to ensure the mission will be successful.

Zurbuchen said there would be a "little bit of a pause" after the board delivers its final report, in part because of a prior commitment by Young in early June that makes him unavailable for discussions about the report or additional work. He said NASA will start briefing Congress and others about the report, and the agency's response, in late June.

That report will allow NASA to refine a launch date of approximately May 2020 that it announced March 27. Robinson believed there was margin in the revised development schedule to maintain that date. "We believe we have good margin there, and a lot that margin is for things like we just experienced," he said. "I still believe we'll go in 2020, in roughly the same timeframe that we talked about, unless this problem takes longer than we expect."

One lesson already learned, he said, was the need for more NASA oversight of Northrop Grumman's work. "We had people in the plant for a long time, four or five people," he said. "We've added a lot of folks in the past five or six months for oversight at Northrop Grumman."