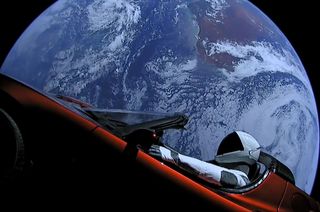 CAPE CANAVERAL, Fla. — Starman is traveling through the solar system, riding in the driver's seat of a midnight cherry Tesla Roadster with the top down.

The improbable, if also surreal scene, captured in a video broadcast back to Earth, unfolded live on Tuesday evening (Feb. 6) as a finale to SpaceX's maiden launch of its Falcon Heavy rocket. The car served as a mass simulator, taking the place of a real payload given the risks that the test flight might have failed.

But it did not fail.

"I am really excited about today and proud of the SpaceX team," said Elon Musk, SpaceX's CEO and lead designer, in a post-flight press conference. "The mission seems to have gone really as well as one could have hoped." [Related: See Epic Views of the Tesla Roadster in Space]

"I am still trying to absorb all that happened because it still seems pretty surreal to me," he said.

The 230-foot-tall (70 meter) rocket lifted off on the thrust generated by 27 engines from Pad 39A at NASA's Kennedy Space Center in Florida at 3:45 p.m. EST (2045 GMT) Tuesday. As it climbed toward space, the Falcon Heavy survived Max Q, the point of maximum dynamic air pressure, and its two side boosters separated from the center core successfully, something SpaceX had never tried in flight before.

The boosters, each a modified Falcon 9 first stage that had flown before, touched down within seconds of each other at SpaceX's landing zones at Cape Canaveral Air Force Station. The center core, which was intended to land on an ocean-based droneship, instead hit the water hard and exploded, the only blemish on an almost perfect first flight.

The Falcon Heavy, now the most powerful operational rocket in the world, not only reached space, but also demonstrated — with a second firing of its second stage engine — the booster's ability to put a satellite directly into geosynchronous orbit.

And then the second stage engine lit again, putting the Roadster and its Starman passengeron what was expected to be a precessing Earth-Mars elliptical orbit, but, according to an update from Musk on Twitter, "exceeded Mars orbit and kept going to the Asteroid Belt." For the next few million, if not billion years or so, the Starman — named in tribute to the late David Bowie — will travel through the inner solar system.

'Made on Earth by humans'

The video sent back from the Roadster showed the car and its Starman passenger set against an almost full-disc Earth as it climbed to as high as 4,400 miles (7,000 kilometers) above the planet.

"You can tell it is real because it looks so fake," Musk said. "We'd have way better CGI if it was fake. The colors look kind of weird in space. There is no atmospheric occlusion. Everything is too crisp." [In Photos: SpaceX's 1st Falcon Heavy Rocket Test Launch Success!]

The Roadster was not modified, nor apparently tested, to guarantee its survival on its trip into deep space.

"We did not really test any of those materials for space. It just has the same seats that a normal car has. It is just literally a normal car — in space. And I just kind of like the absurdity of that," Musk said.

And as if a car in space was not enough of a spectacle, the Roadster carried with it a few subtle and not-so-subtle "Easter eggs."

Beginning with the Starman itself, the spacesuit worn by the mannequin was not a costume, but rather marked the first in-space use of a garment designed for NASA astronauts to wear on SpaceX's upcoming Dragon spacecraft crewed flightsto the International Space Station.

"That is actually the production design. The real one looks just like that," described Musk. "In fact, that is one of the qualification articles. That is the real deal."

"I figure it is a dangerous trip, you want to look good," he said with a smile.

As the camera views changed from showing the Roadster from its side and front to a view looking over the Starman's shoulder, another detail was revealed — on the dash screen was a sign with a science fiction-inspired message.

Prior to the launch in December, Musk was asked on Twitter if the Roadster would contain a copy of "The Hitchhiker's Guide to the Galaxy" by Douglas Adams.

A more subtle, hidden message was shared by Musk on Instagram soon after the Roadster had entered space.

"Printed on the circuit board of a car in deep space," wrote Musk, captioning a photo of the inscription reading, "Made on Earth by humans."

The names of more than 6,000 of those humans — SpaceX employees — were engraved onto a plaque mounted on the payload attach fitting, the structure that held the Roaster onto the Falcon Heavy's second stage.

"The work that goes into defining, building and launching a vehicle of this sort is no small feat. We're super excited to be part of the Roadster's billion-year journey through the solar system," said Lauren Lyons, a SpaceX flight reliability engineer, during the company's webcast of the launch.

Silly and fun, yet important

Secured inside the Roadster is an Arch (pronounced "Ark"), a laser optical quartz storage device designed to survive the harsh environment of space. The disc was provided by the Arch Mission Foundation, whose stated goal is to "preserve and disseminate humanity's most important information across time and space, for the benefit of future generations."

"On the Arch that is being launched [on Falcon Heavy], the Foundation has stored Isaac Asimov's classic sci-fi series 'The Foundation Trilogy,' which was the original inspiration for the Arch Mission," said Lyons.

And then there is Hot Wheels Roadster on the dash of the real Roadster.

"It's kind of silly and fun, but silly and fun things are important," he said. "I think the imagery of it is something that is going to get people excited around the world."

It might also attract the attention of whoever encounters the car in millions, if not billions of years from now, postulated Musk.

"Maybe it'll be discovered by some future alien race thinking, 'What the heck were these guys doing? Did they worship this car?'" quipped Musk. "'Why do they have a little car in the car?' That will really confuse them.”

See more easter eggs and watch a replay of the live views of SpaceX’s Starman and the Tesla Roadster in space at collectSPACE.