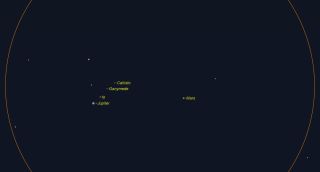 For observers in the Americas, Mars and Jupiter will come extremely close together in the southeastern sky, on the mornings of Jan. 6 and 7.
(Image: © SkySafari App )

It is sometimes difficult to rouse oneself out of a warm bed in the predawn hours to get a view of some celestial event, and that's especially true now with such bitter-cold temperatures enveloping much of the country. But it will be worth braving the frigid outdoors early on Sunday (Jan. 7) morning to get a view of two planets that will be engaged in a very close conjunction.

Mars and Jupiter are like two ships passing in the January night  — or more precisely on the edge of the January dawn. At the break of dawn, you will find them more than one-quarter of the way up from the southeast horizon to the point directly overhead (the zenith), separated by less than two-tenths of a degree. Jupiter is enormously brighter than Mars — 191 times brighter to be exact — with Jupiter staying in view long after the morning twilight has brightened enough to render its little companion invisible.

The gap between the worlds has been closing since the start of the new year. On the morning of New Year's Day, they were within less than 3 degrees of each other. They'll be within 2 degrees of each other from Jan. 2 through the 11th and will still be no more than 5 degrees apart by the 17th. [The Best Planets to See in the 2018 Night Sky]

On Sunday morning (Jan. 7), Mars and Jupiter will be at their closest to each other, separated by less than half the apparent width of the full moon. Mars and Jupiter don't approach this closely to each other very often. The last time was almost exactly 20 years ago, on Jan. 20, 1998, and the next opportunity will not come for more than 16 years, on Nov. 30, 2033. So, if your local weather forecast calls for clear skies Sunday morning, try to get up and check out this unusual planet rendezvous.

And take a good long look and put this in your mental file, because things are going to change quite a bit between now and this summer. While Jupiter is the dominant planet in the sky now, keep in mind that with each passing day, Mars is getting closer to Earth. On Sunday, it will be 176.5 million miles (284 million kilometers) from Earth, but by the end of July, it will be five times closer and will temporarily supplant Jupiter as the second brightest planet. In fact, in July, Mars will be nearly twice as bright as Jupiter — a far cry from its current "little companion" status!

The moon pays a visit

And another member of the solar system will pay these two worlds a visit four days later, on Thursday morning, Jan. 11. A lovely waning crescent moon will form an isosceles triangle with Mars and Jupiter.

The trio will clear the east-southeast horizon soon after 3 a.m. local time and will be well-placed for viewing a couple of hours later. The two planets will form the base of the triangle with the moon at the vertex point.

If you envision this configuration as an arrowhead, the arrow will be oriented to point toward the upper left.

And a few stars thrown in for good measure

If you look carefully enough, you might spy a moderately bright star to the upper right of Jupiter. Train binoculars on this object, and you'll see not one star but two. The brighter star is Zubenelgenubi, which belongs to the zodiacal constellation of Libra, the Scales, but at one time, it was part of the constellation of Scorpius, the Scorpion. Its very name is Arabic for "the Southern Claw," and at one time, Zubenelgenubi marked the tip of the southern claw of the scorpion. Both Zubenelgenubi and its fainter companion are traveling together through space at a distance of 76 light-years from us.

Finally, on the morning of Jan. 14, use binoculars to check out Jupiter, which will be passing closely between two stars: 21 Nu (ν) Librae and 22 Librae, with 21 above Jupiter and 22 below the planet. The former star has a brightness of magnitude 5, and the latter has a brightness of magnitude 6. (Check out this Space.com guide for more information on the stellar brightness scale.) Steadily held binoculars should also show all four of Jupiter's famous Galilean satellites, with Callisto, Io and Europa on one side of Jupiter and Ganymede all by itself on the other.

In all, right on through the middle of the month, you'll have a chance at viewing an ever-changing "celestial summit meeting."

All you have to do is set the alarm clock for around 5 a.m.

Editor's note: If you capture an amazing photo of Mars and Jupiter together, and would like to share it with Space.com for a story or gallery, send images and comments to: spacephotos@space.com.

Joe Rao serves as an instructor and guest lecturer at New York's Hayden Planetarium. He writes about astronomy for Natural History magazine, the Farmer's Almanac and other publications, and he is also an on-camera meteorologist for Verizon Fios1 News, based in Rye Brook, N.Y. Follow us @Spacedotcom, Facebook and Google+. Original article on Space.com.