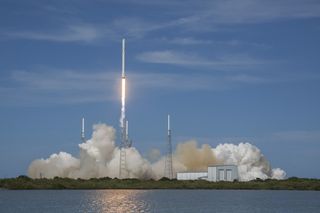 A SpaceX Falcon 9 rocket launches the company's Dragon capsule on an uncrewed cargo run to the International Space Station on April 14, 2015. The same Dragon is schedule to launch toward the orbiting lab again on Dec. 4, 2017.
(Image: © SpaceX)

If you want to make the case that spaceflight is about to take a giant leap, SpaceX's next cargo run to the International Space Station (ISS) for NASA could be Exhibit A.

That mission, which is currently scheduled to launch on Dec. 4, will likely represent a reusability landmark. The cargo run will employ a pre-flown Dragon capsule, and the chances are good that the Falcon 9 rocket lofting the freighter will feature a used first stage as well, NASA officials have said.

And consider the cargo: One of the science investigations riding Dragon is a machine built by California-based company Made In Space that's designed to produce optical fiber aboard the ISS. If all goes according to plan, this experiment could be a big step toward the establishment of an off-Earth economy, Made In Space representatives have said. [The International Space Station: Inside & Out (Infographic)]

"We should think about who else we should get to fly on [this Dragon mission], to make it even more the bleeding edge of space," Made In Space CEO Andrew Rush told Space.com with a laugh.

SpaceX and its billionaire founder and CEO, Elon Musk, have long prioritized the development of reusable rockets and spacecraft, stressing that such technology will slash the cost of spaceflight and thereby open the heavens to greater exploration.

Musk's company has made a lot of progress toward turning that vision into reality. To date, SpaceX has successfully brought Falcon 9 first stages back to Earth 19 times during orbital missions, and three of those landed boosters have flown again.

SpaceX has also relaunched a Dragon to the ISS once. This past June, a Falcon 9 lofted a Dragon that also visited the orbiting lab in September 2014. But that rocket was completely new, so the upcoming resupply flight will break new ground in reusability if NASA does indeed greenlight the use of a pre-flown Falcon 9 first stage. (The Dragon that will lift off next month previously launched toward the ISS in April 2015, on SpaceX's sixth contracted cargo mission for NASA. Next month's launch will initiate resupply run number 13.)

Dragon, by the way, is the only currently operational cargo vehicle capable of being re-flown. The capsule comes back to Earth for soft, parachute-aided ocean splashdowns; all other uncrewed freighters are designed to burn up in our planet's atmosphere after their time at the ISS is done.

Such re-flights represent a sort of proving ground for SpaceX, which is working toward something much bigger. The company is developing a giant, fully reusable rocket-and-spaceship combo called the BFR, which Musk wants to use for a variety of purposes — especially to help establish a million-person city on Mars in the next half-century or so. [The BFR: SpaceX's Mars-Colonization Architecture in Images]

Made In Space also has big dreams: The company is working on multiple projects that could lead to greater exploration and commercial development of the final frontier.

For example, Made In Space has launched two 3D printers to the ISS and currently operates one as a fully commercial facility. (NASA owns the other one.) Such machines could reduce the cost and risks associated with spaceflight (for example, by allowing voyaging astronauts to print out needed parts on demand), company representatives and NASA officials have said.

The two 3D printers aboard the ISS can currently manufacture products using only polymer "feedstock," but Made In Space is working to add metal to its orbital repertoire. The company is developing a metal-capable system known as Vulcan, with the aid of a NASA Small Business Innovation Research grant, which was awarded in July. And Made In Space is also working on a metal "extruder" head that could be added to a 3D printer already on the orbiting lab, Rush said.

"One of the broad goals that we have at Made In Space is to bring as many manufacturing technologies to a space-ready state as possible," Rush said. "The objective is ultimately to have the same kind of machine-shop manufacturing capabilities [that] you have on Earth in space."

Another project is Archinaut, a 3D-printing, robotic-arm-equipped spacecraft. Company representatives said this craft will be able to build big structures such as telescopes on orbit, and also repair and upgrade existing satellites.

Then there's the ZBLAN machine that's going up next month, as part of a project that's a collaboration with New Jersey-based company Thorlabs. Made In Space has said that space-produced ZBLAN optical fiber could be orders of magnitude more efficient than the stuff made here on Earth (because our planet's powerful gravity induces imperfections in the fiber's fine-scale structure).

The upcoming experiment is designed to test this idea out and help Made In Space determine if there's a viable market for the product.

"This will be the first in a program of flights to demonstrate and then really dial in this manufacturing of high-value materials in space," Rush said.