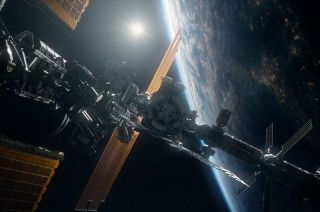 The International Space Station, reimagined for the movie "Life." In the film, a Mars sample return mission sends Martian soil to the station for analysis.
(Image: © Sony Pictures)

In the new science-fiction horror movie "Life," a group of astronauts aboard the International Space Station finds a living organism in a Martian dirt sample, and (as you can probably guess from the trailer) things go horribly wrong from there.

While much of "Life" exists in the realm of fiction, NASA and other space agencies are discussing the possibility of bringing samples of Mars dirt back to Earth. Would a real-world Mars sample-return mission look anything like the one in the movie?

The nature of such a mission would depend on many factors, but one aspect of the movie's plot seems highly unrealistic: It's unlikely there would ever be a good reason to send a Martian dirt sample to a space station, according to Catharine Conley, the planetary protection officer for NASA. [Bringing Pieces of Mars to Earth: How NASA Will Do It]

Too close to home

There have been a handful of sample-return missions that succeeded in bringing bits of the cosmos back to Earth. The Apollo astronauts brought back a significant number of moon rocks (so many, in fact, that NASA lost track of more than 500 of them). NASA's OSIRIS-Rex mission is on a mission to return a sample of an asteroid to Earth in 2023. The agency's Mars 2020 rover will collect soil and rock samples that could be picked up by a sample-return mission later. Currently, there is no solid plan for how those Mars samples would get back to Earth (the private spaceflight company SpaceX has proposed using one of its Red Dragon capsules to retrieve the Martian dirt).

There is no strict protocol for how sample-return missions are handled, because each one is different, Conley told Space.com. An asteroid-sample-return mission like OSIRIS-Rex, which is bringing back material from a rock that has no atmosphere and has been exposed to space radiation for millions of years, isn't considered a biohazard threat to the planet. But a sample coming back from Mars would probably be handled very differently, she said.

"Planetary protection requirements are applied on a mission-by-mission basis," Conley said. There's a framework of questions that can help mission planners approximate what protections they will have to put in place. For a Mars sample return mission, it would probably be an international board then evaluates the mission plan based on the best available information about the potential threat that a sample could pose, and how to contain that threat, Conley said.

In "Life," the sample is brought to the space station (which is modeled fairly accurately) as a way of keeping a potential Martian biohazard away from Earth. But the station's nearness to Earth is one reason why sending a Mars sample to there (or any laboratory orbiting the planet) probably wouldn't make sense for a real-world sample-return mission, Conley told Space.com.

The characters in the film come to a similar conclusion too late. After a few failed attempts to kill the alien creature, the characters realize that the creature seems robust enough to survive the fall through Earth's atmosphere, meaning it could potentially wreak destruction on the entire human race. (In the film, the space station is thrown off course and begins falling toward the planet at a rapid rate. But anything looping around the Earth will eventually fall toward the ground if the spacecraft doesn't use thrusters to maintain its orbit ― although that may take decades depending on the speed of the craft and the altitude of its orbit).

The fall through Earth's atmosphere generates an incredible amount of heat — enough to vaporize a midsize spacecraft without a heat shield. However, chunks of some large spacecraft and large space rocks can survive the fall to the ground, so it’s not impossible that a biological sample tucked inside a protective layer could also survive the journey.

Another problem with the movie's approach to handling a Mars sample is that it'd be extremely difficult and expensive to look for trace signs of life while in space.

Mars does not appear to be home to any obvious forms of life; there are, of course, no trees or animals living there. But there are also no lichens growing on rocks and no immediate signs of bacteria, algae or single-celled creatures living on the surface. Mars, however, used to be a much more hospitable environment, so there is a possibility that there are signs of past life in the Martian soil, or further evidence that the planet possesses the necessary building blocks of life.

"Mostly, the way you look for biology — like a lot of the new techniques for looking for disease organisms — is that you break [the samples] up into molecules and you look at the molecules," Conley said. "So those would be the kinds of techniques that we would be looking to use on a Mars sample."

Based on what scientists know about Mars, it's possible that finding signatures of present or past life on the Red Planet will require complex analyses that have to be done in a lab on Earth, where scientists have access to the widest range of tools.

The tools available on the space station are much more limited. Almost every aspect of life in space is altered by the weightless environment, including using the bathroom, taking a shower, eating, sleeping and exercising. Science is different in space, too. In weightlessness, physical systems behave differently than they do on Earth. Everything floats, of course, which poses unique hazards regarding sample containment. The lack of gravity also changes how crystals grow, fires burn and liquids behave. Therefore, instruments, like microscopes, would need to be calibrated to the space environment, and often designed differently to operate under those conditions, Conley said.

To analyze a Martian sample in space, scientists would have to adapt and test several different experimental procedures for the space environment, something that would take a lot of time, effort and money, Conley said.

"Actually getting the equipment you need to do these careful analyses up to [a location in space] would be extraordinarily expensive [and] considerably less reliable than operating equipment on Earth, where we know how it works properly," she said.

That also applies to the containment device that would be used to hold the Mars samples. The international recommendations for a sample-return mission recommend that scientists begin designing the containment device years in advance, and then spend a few years testing it and demonstrating that it can perform as well as it needs to, Conley said. Once again, performing that kind of testing in space would be incredibly expensive and slow — if something breaks or needs to be replaced, the scientists can't just call up the company that made the part and ask them to drive over a new one, Instead, they'd have to pack one onto a rocket and send it to the station.

Yet another problem with looking for trace signs of life in Martian samples on the space station is the same problem that plagues rovers on the Mars surface — sometimes scientists don't know what kind of equipment they'll need to test the sample until they already have the sample. Depending on the chemical composition of the Martian soil, scientists might need to conduct different tests to pursue the big question of whether life could have formed there. On Earth, additional equipment is easily obtainable, but in space or on Mars, it's extremely difficult and time- consuming to procure.

"If you're not able to use multiple techniques to assess something, then you're not necessarily able to make the measurement that's going to tell you when something's interesting, " Conley said. By bringing Martian samples back to Earth, scientists can use the appropriate tool to answer whatever question pops up.

Finding signs of past or present life on Mars will likely require bringing a sample of Martian dirt back to Earth, but that scenario is limited by two main factors: engineering and budget. Right now, there are no operational means of bringing a dirt sample to Earth from Mars, and it's far more cost-effective to send a robot to Mars than to bring a sample back, Conley said. So, for now, a Mars sample-return mission has not progressed beyond the concept phase.

But all that could change if humans found clear evidence of life on Mars; for example, if a rover spotted lichen on a rock or bacteria in a soil sample, Conley said.

Conley said she was not aware of any official discussions about what would happen if a Mars rover discovered something that looked "a lot like life." (Although astrobiologists have undoubtedly talked about this among themselves.)

"Once you find something [that looks like life], then all bets are off, and we're going to reconsider everything," Conley said. "The assumption is that there will be so many opinions and so much additional information by the time we actually do discover something that looks like life … [so] that particular 'what if' hasn't been addressed in any great detail."

The community might decide to send astronauts to Mars to do additional studies, or bring samples back to Earth. But that would all depend on what information was available, Conley said. She said that the people overseeing a sample-return mission would want to enter that discussion with a clean slate, so the mission would be tailored to that specific situation. Which means it's impossible to say for sure whether a sample-return mission might send Martian dirt to the space station — but it still seems rather unlikely.