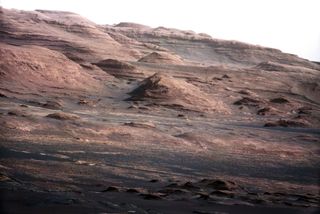 A chapter of the layered geological history of Mars is laid bare in this image from NASA's Curiosity rover. The image shows the base of Mount Sharp, the rover's eventual science destination.
(Image: © NASA/JPL-Caltech/MSSS )

The Mars rover Curiosity — the centerpiece of NASA's $2.5 billion Mars Science Laboratory (MSL) mission — has 10 instruments to help it characterize the Martian environment and determine if the planet ever had the potential to support life.

One of these is the Sample Analysis at Mars instrument, or SAM. Roughly the size of a microwave oven, SAM — actually a collection of three separate instruments — will analyze samples taken by Curiosity's robotic arm, looking for carbon-based compounds.

MSL participating scientist Danny Glavin, of NASA's Goddard Space Flight Center in Greenbelt, Md., is one of the SAM team members who will try to determine if the building blocks of life could ever have survived on the surface of Mars. Here, he shares his thoughts on SAM and its role in Curiosity's mission.

Glavin: At NASA-Goddard, I work with a team of researchers in the Astrobiology Analytical Laboratory. Half my time I spend analyzing meteorites and other materials from space. We've looked at samples returned from the Stardust comet mission, we study lunar samples and meteorites that are found in Antarctica, including meteorites from Mars.

And we're really focused on determining what kind of organic compounds are present in these materials, specifically focused on amino acids and nucleobases, which are the basic building blocks of life. So part of my time is spent working on that research, the meteorite stuff.

The other half of my time I'm devoting towards MSL and the Sample Analysis at Mars (SAM) experiment, where we've been working on a wet chemistry experiment that will target those same types of organic compounds found in some meteorites, the amino acids and nucleobases, through a chemical reaction with the soil and rock materials collected by the rover Curiosity on Mars. [11 Amazing Things Curiosity Can Do]

We've been optimizing that experiment for SAM and are pretty much chomping at the bit, waiting for the opportunity to study rock samples on Mars. So yeah, we're looking forward to the SAM wet chemistry experiments.

What do you do specifically for MSL?

Glavin: I'm a MSL participating scientist and a member of the SAM team, primarily focused on the GCMS — gas chromatography-mass spectrometry — analysis of organic compounds, if they're present in the Martian surface materials, and more specifically this wet chemistry experiment, which is basically a front end extraction for the GCMS analysis.

We need to prepare the solid samples in a way that extracts the organics from the minerals, which might include amino acids and nucelobases, in order to make these compounds volatile enough to make it through the GC and be detected by the mass spectrometer.

The Viking missions, which successfully put two landers on the Martian surface in 1976, both had GCMS instruments, but they didn't have this wet chemistry capability. Compounds like amino acids and nucleobases, the fundamental building blocks of life, would not have been detectable by the Viking instrument. This is really the first robust search for these compounds on Mars.

How could your work help to answer astrobiology questions?

Glavin: The goal of this mission is to assess the habitability potential of an environment on Mars. We're at the bottom of Gale Crater, and we're trying to determine whether or not that was or currently is a habitable environment. [Gale Crater Explained (Infographic)]

Of course, there are a lot of signs that point to that being the case — otherwise we wouldn't have gone there. There was clearly water present at one time inside that crater; we see that evidence from orbit with the layers of clay minerals at the base of Mount Sharp inside the crater.

What I'm working on specifically, with respect to the Sample Analysis at Mars experiment, or SAM, is the ability to detect organic compounds in these materials. I think that's sort of the second step toward assessing habitability. The first is, was there water there — liquid water — available for prebiotic chemistry and possibly life?

The second thing is, are there the basic elements of life — carbon, hydrogen, oxygen, nitrogen, phosphorous, sulfur — and are there reduced forms of carbon, particularly organics? That's one of the key pieces of information that's currently been missing from Mars. We don't really have a good answer to that question yet. I'm hopeful that SAM will help us to understand whether or not organic compounds are present on Mars or not.