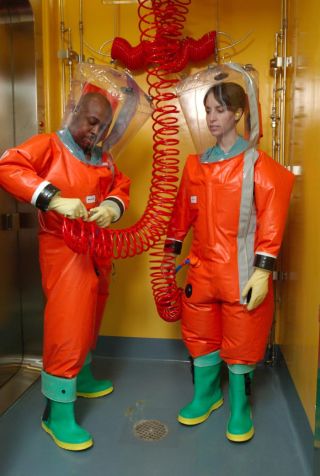 Centers for Disease Control microbiologists are shown in this 2007 photo in the process of suiting up to access the interior of the organization's Biosafety Level-4 (BSL-4) laboratory.
(Image: © CDC)

Measures taken in the current Ebola outbreak may hold some clues for how to handle samples brought back to Earth from Mars, a place that could potentially host extraterrestrial microbes.

The 1971 sci-fi film "The Andromeda Strain" dramatized the idea of alien organisms infecting the Earth. Based on a novel by Michael Crichton, the film depicts the spread of an alien germ brought back to Earth by a satellite. An elite team of specialists responds, relying on protective hazmat suits, decontamination and disinfection safety levels, and a secret, high-tech underground facility named Wildfire to study and deal with the deadly extraterrestrial organism.

NASA officials have wanted to build and launch a robotic lander that scoops up some Martian samples and returns them to Earth. Similarly, a human expedition to Mars would surely hunt for past or present evidence of life on the Red Planet. Hauling back Martian samples means potentially dealing with biological "hot property," as well as public concern about creepy crawlers from Mars eating away at Earth's biosphere. [The Search for Life on Mars (A Photo Timeline)]

Space.com asked some key astrobiologists if today's Ebola outbreak might have any lessons for future sample-return plans from Mars.

"While the Ebola situation bears no resemblance to a sample-return mission to Mars, there is a concern that the public could link the two if not properly informed," said John Rummel, a professor of biology at East Carolina University in Greenville, North Carolina.

Rummel told Space.com that a Mars sample would be contained from the time it leaves Mars until it is proven not to pose a biohazard threat.

"Even more important than the containment facility in which the testing will be done is the fact that scientists will 'practice, practice, practice' to ensure that the sample is contained until shown to be safe for release," Rummel said.

"In that context," Conley said, "it is true that the greater public awareness of issues related to hazardous materials not being contained properly, and particularly the unfortunate examples of false negatives — like the person not appearing to be sick when he got off the plane in Dallas — do make it easier to communicate similar concerns in the area of planetary protection."

The current outbreak also highlights "the need to have good protocols in place prior to bringing potentially hazardous materials back to Earth, and having a very careful and well-tested plan for how to determine that they are 'safe,'" Conley told Space.com.

"This is something planetary protection has been working on for quite a while now … but recent events demonstrate how important it is for Earth safety to avoid false negatives, as well as avoiding false positives to protect human activities at Mars," Conley said.

"I see many issues that we know are a problem being illustrated by the mass reaction, kerfuffle, and misinformation and misunderstanding surrounding Ebola," said Penelope Boston, an astrobiologist and director of the Cave and Karst Studies Program at the New Mexico Institute of Mining and Technology in Socorro.

Boston is a geomicrobiologist and astrobiologist with more than 35 years experience.

"If I were personally going to deal with an agent like Ebola I would go train for six months at a Biosafety Level 4 (BSL-4) containment facility before I trusted myself to work with the virus," Boston said. "I would always have a safety officer bird-dogging my every movement — the buddy system — that is employed in so many hazardous military and civilian contexts," she said.

When going into dangerous and potentially deadly environments, like the sulfuric acid cave in Tabasco, situated in southern Mexico, Boston said, a dedicated safety monitor is part of the exploration team.

"That's because no person can both keep their mind on the intensive scientific work they are doing and be absolutely assured of their own adherence to very fussy safety procedures," Boston told Space.com.

"And of course, with spacecraft, we also have the issue of organic chemical cleanliness to deal with, because that could seriously affect the results of highly sensitive life-detection experiments," Boston said. "So the space exploration case is a double-whammy that we are developing protocols to deal with."

The Center for Disease Control (CDC) has guidelines for all types of biological pathogens, and NASA has worked with the health agency in planning for Mars, said Margaret Race, a senior research scientist at the SETI Institute in Mountain View, California.

Race focuses on the scientific, technical, legal and societal issues of ensuring that missions to the Red Planet and other solar system bodies do not either inadvertently bring Earth microbes to Mars, which would complicate the search for indigenous extraterrestrial life, or return any microbes to Earth. [Mars Myths and Misconceptions: A Quiz]

The CDC has designated different levels of containment. The most virulent agents are kept in Biosafety Level 4 (BSL-4) and have "special" protocols.

"The CDC generally works with known pathogens, but also oversees all types," Race said. "If in doubt, keep it contained and continue to study it," she told Space.com. "Quarantine and containment requirements are updated as needed, for example in response to things like Ebola."

NASA developed its draft Mars sample handling and testing protocols in coordination with experts from CDC and other regulatory agencies, Race said.

NASA's protocols for Mars samples will take into account both safety and scientific accuracy, Race said.

"Clearly, science considerations also apply," she said. "According to studies by the U.S. National Research Council, the risks of Mars sample return materials are deemed very low, but not zero."

NASA will take a deliberately conservative view in handling pristine returned Martian materials, Race aid. This is both for planetary protection considerations, as noted in Outer Space Treaty requirements that are promulgated by COSPAR, and to protect the scientific integrity of the samples.

"Obviously, any Mars sample return plans will comply with the most up-to-date CDC and other requirements," Race concluded.

Leonard David has been reporting on the space industry for more than five decades. He is former director of research for the National Commission on Space and is co-author of Buzz Aldrin's 2013 book "Mission to Mars – My Vision for Space Exploration," published by National Geographic. Follow us @Spacedotcom, Facebook and Google+. Original article on Space.com.