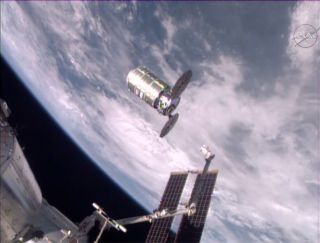 The unmanned Cygnus cargo ship Deke Slayton II departs the International Space Station at the end of its resupply mission. The robotic spacecraft will be commanded to intentionally burn up in the Earth's atmosphere for disposal.
(Image: © NASA TV)

Cygnus is ready to take the plunge: This morning (Feb. 19), at 7:26 a.m. EST (1226 GMT), the International Space Station's robotic arm released the latest Orbital ATK cargo ship into open space so the unmanned spacecraft can end its resupply mission with a death dive into Earth's atmosphere.

Once it is safely away from the station, the commercial Cygnus spacecraft will fire its engines twice to re-enter Earth's atmosphere and burn up over the Pacific Ocean.

The supply craft, named the S.S. Deke Slayton II, arrived at the space station in December, carrying more than 7,700 lbs. (3,500 kilograms) of cargo — the most ever carried in a Cygnus craft. It featured an expanded design that allowed it to carry about 25 percent more cargo than previously, and it was blasted upward by United Launch Alliance's Atlas V rocket. (This was the first Cygnus launch since the explosion of Orbital ATK's Antares rocket in October 2014.)

When it launched to the station, the supply craft carried several experiments, including a locker-size life sciences research module, an experiment for testing flame-resistant and flame-retardant textiles in microgravity, and two modular sets of microsatellites. Plus, the craft carried replacement parts for the space station and consumable supplies. (And it brought a student-made experiment aboard, featuring a medallion blessed by the Pope.)

The space station crew has spent the past few days filling the Cygnus spacecraft with trash before its departure, while also performing their normal experimental work in the orbiting lab.