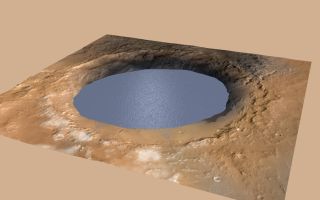 Illustration depicting a lake of fresh water partially filling Mars' Gale Crater. Gale hosted a series of such lakes that each persisted for hundreds to tens of thousands of years at a time, a new study suggests.
(Image: © NASA/JPL-Caltech/ESA/DLR/FU Berlin/MSSS)

Ancient Mars harbored long-lasting lakes, boosting the odds that life could have existed on the Red Planet billions of years ago, a new study suggests.

A series of freshwater lakes within Mars' 96-mile-wide (154 kilometers) Gale Crater likely persisted for hundreds or thousands of years at a time, and perhaps even longer, according to the new study, which is based on observations made by NASA's 1-ton Curiosity rover.

While these individual lakes were apparently transient, drying out and filling up repeatedly over time, the overall lake-and-stream system inside Gale Crater existed for a quite a long time, researchers said. [Photos: The Search for Water on Mars]

"Even if the lake goes away, there's still going to be a groundwater table," study lead author John Grotzinger, of the California Institute of Technology in Pasadena, told Space.com.

"If life had evolved on Mars, you now have a habitat which is perpetually wet that would allow microbes to be sustained," added Grotzinger, a Curiosity team member who previously served as project scientist on the $2.5 billion mission. "Those environments would have existed probably for millions, if not tens of millions of years throughout the rocks that we see."

Curiosity has been exploring the spacious interior of Gale Crater since August 2012, when the car-size rover landed on a mission to determine if the area could ever have supported microbial life.

Curiosity succeeded in this main task quickly, finding evidence near its landing site that a habitable lake-and-stream system existed within the crater about 3.5 billion years ago.

The new study, which was published online today (Oct. 8) in the journal Science, further characterizes that system and its duration. Grotzinger and his colleagues analyzed photos taken by Curiosity near the robot's landing site and throughout its 5-mile-long (8 km) traverse to Mount Sharp, which rises 3.4 miles (5.5 km) into the Martian sky from Gale's center. (Curiosity set out for Mount Sharp's foothills in July 2013 and arrived there in September 2014.)

Those photos contain copious evidence of river, delta and lake environments within Gale, which is thought to have formed after a massive impact about 3.8 billion years ago. Streams carried sediments from the crater's northern rim and walls down to the floor, where the intermittent lake existed, study team members said.

It's unclear how deep the Gale lake was, Grotzinger said, though he suggested a possible maximum depth in the "tens of meters" range.

Water may have gotten to the crater rim in the form of snow, or perhaps as ice that condensed out of the atmosphere, Grotzinger said. Gale's northern rim lies adjacent to Mars' extensive northern plains, which some scientists think hosted an ocean when the crater lake system existed.

"If there was some type of a northern ocean, that would be a very convenient way to get water vapor and moisture on the northern rim to generate the very localized deposits we see in Gale Crater itself," Grotzinger said.

Mars has no oceans today, of course, or any liquid surface water that's stable for long periods of time. (However, scientists recently announced that the seasonal dark streaks on some Martian slopes are caused by flowing water.)

Researchers are trying to understand what happened to the Red Planet's surface water, and Curiosity's observations should help them in that quest, Grotzinger said. Indeed, Curiosity is now climbing up through Mount Sharp's lower reaches, reading the rocks for clues about how Mars' climate has shifted over time.

Mount Sharp, which is also known as Aeolis Mons, is a bizarre massif with no close analogues here on Earth. Researchers have been debating how the mountain's core formed, whether its constituent particles were delivered mostly by water or by wind.

"It seems to have formed largely by erosion of pre-existing strata that were deposited in aqueous environments," Grotzinger said.

That erosion comes courtesy of the wind, which has been carving away portions of the original mound over the eons. But the wind apparently played a constructive role as well, depositing the material that forms Mount Sharp's upper layers.

"Above 800 meters, Mount Sharp shows no evidence of hydrated strata, and that is the bulk of what forms Mount Sharp," Grotzinger said in a statement. "We see another 4,000 meters of nothing but dry strata."

Scientists can estimate the age of a planetary surface by counting its craters, which accumulate at a relatively constant rate over long periods of time. Crater counting suggests that the terrain Curiosity has been exploring was exposed by around 3.3 billion years ago, researchers said.

The processes that built and eroded away the mound that became Mount Sharp therefore seem to have acted surprisingly quickly, Grotzinger said.

"In that interval of 500 million years, you had the crater becoming filled up with sediments deposited in aqueous environments, perhaps also associated with final filling up of drier sediments that make the bulk of Mount Sharp," Grotzinger told Space.com. "All of that has to be eroded back down again. I think that's new. That's one of the really interesting implications."