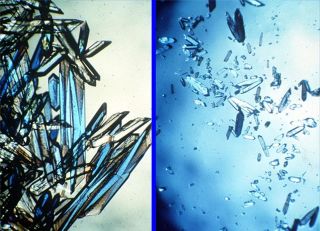 Crystals of proteins that could be useful in medical research can be grown bigger and better in space than on Earth, according to the results of experiments performed on the International Space Station.

Medical research often focuses on examining how proteins work. That can include learning how to use proteins in medicines, or finding proteins that cause problems for humans and making drugs to fight them. A better understanding of a protein's 3D structure can, for example, help scientists improve how well a medicine works, or find out the best ways to kill a germ.

Most of the more than 100,000 3D protein structures that scientists have collected to date have come from X-ray scans. However, these X-ray scans cannot detect hydrogen atoms, which make up about 50 percent of the atoms in these proteins and may play important roles in the protein's activity. Neutron scans can determine the precise locations of these hydrogen atoms, but these require large protein crystals, which are difficult to grow. As such, fewer than 100 3D protein structures have been determined using neutron beams, said study lead author Joseph Ng, a biochemist and director of the Biotechnology Science and Engineering Program at the University of Alabama in Huntsville.

Previous research found that growing large pure crystals of protein is difficult on Earth because of effects arising from the planet's gravity. In gravity, heavier fluids sink and lighter fluids rise, driving convection or churning that can interfere with crystal formation. Previous work has long suggested that in the microgravity experienced in orbit around Earth, such problems with crystal growth would largely vanish, the researchers wrote in a paper describing the new experiments. (This new experiment is not the first time scientists have grown protein crystals in space. Cost and logistics are also barriers to carrying out these kinds of experiments).

The scientists behind the new study designed microgravity experiments to grow crystals of a protein known as inorganic pyrophosphatase (IPPase) in space. This protein is an enzyme found in most living organisms that plays an important role in bone formation, DNA synthesis, and the making and breaking down of fats, the researchers said.

The protein crystallization system the scientists developed for the experiments uses tiny tubes to control the flow of a solution containing dissolved proteins. The geometry of the tubes forces the proteins to concentrate in part of the solution, causing it to become supersaturated, meaning there are too many proteins to stay comfortably dissolved. The proteins then emerge from the solution to form a crystal.

The researchers launched their system to the space station on April 18, 2014, inside a Dragon cargo spacecraft built by the private spaceflight company SpaceX. The hardware returned six months later on another Dragon cargo vehicle.

The space-grown crystals were not just superior in size, but also in purity, Ng said. This improved quality helped the researchers achieve at least 50 percent higher resolution with them with neutron scans, he said.

The scientists detailed their findings July 24 at the annual meeting of the American Crystallographic Association in Denver.