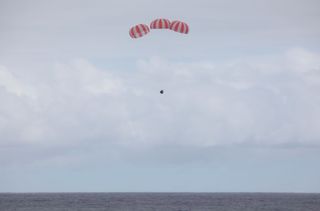 The unmanned Dragon was released from the space station at 9:57 a.m. EDT (1357 GMT). Its parachute-guided splashdown west of Baja California, which was confirmed around 3:38 p.m. EDT (1938 GMT), marked an end to SpaceX's fourth of 12 unmanned delivery missions to the space station for NASA under a $1.6 billion contract.

Dragon had been attached to the orbiting lab for a little more than month. The supply ship launched from Cape Canaveral Air Force Station in Florida on Sept. 21. It spent two days chasing the space station in orbit before docking with the astronaut outpost on Sept. 23, carrying 2.5 tons of food, supplies and critical science experiments, including the first 3D printer in space and a group of 20 mice to live inside a new rodent habitat. [See photos from the SpaceX-4 Dragon mission]

Dragon is the only cargo ship that returns items to Earth intact. After the capsule is brought to port in California, it will be shipped to a SpaceX processing facility in McGregor, Texas. Dragon had been expected to return some of the experiments it brought to space, including a batch of mutant, stress-resistant fruit flies and a protein crystal growth study. The capsule was also slated to return a small crop of lettuce grown in space as part of NASA's Veg-01 experiment, first brought to the space station during SpaceX's last resupply mission in April.

All in all, Dragon returned to Earth today with 3,276 pounds (1,486 kilograms) of cargo and science experiments, SpaceX representatives said.

The astronauts in orbit and mission planners on the ground are managing heavy traffic around the space station during the next few weeks. A NASA commentator in Mission Control in Houston likened it to an "air traffic control situation."

Dragon's release had initially been scheduled for Tuesday (Oct. 21), but mission officials decided to postpone the undocking because of stormy seas in the splashdown zone. Dragon's departure leaves room for the next U.S. private cargo ship, Orbital Sciences' Cygnus spacecraft, which is scheduled to launch Monday (Oct. 27) from NASA's Wallops Flight Facility off the coast of Virginia and arrive at the station the following Sunday (Nov. 2).

A Russian Progress 56 capsule will undock early Monday after more than three months at the station, making way for the arrival of the next Russian cargo vehicle, Progress 57, scheduled to launch early Wednesday (Oct. 29). Three of the crewmembers — Wiseman, Russian cosmonaut Max Suraev and European Space Agency astronaut Alex Gerst — are also preparing to leave the station in a Soyuz spacecraft on Nov. 9 after 165 days in orbit. Three more astronauts will replace them with another Soyuz launch in time for Thanksgiving.

Editor's note: An earlier version of this story stated that some of the first test parts created by Made In Space's 3D printer were expected to return with Dragon. The printer, however, has not yet started to print any items.