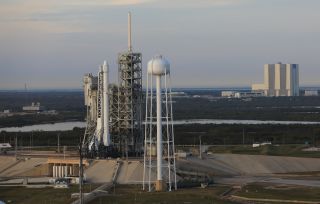 An aerial view of SpaceX's Falcon 9 rocket atop NASA's Launch Pad 39A ahead of the February 2017 launch of the SpaceX-10 mission.
(Image: © NASA/Kim Shiflett)

CAPE CANAVERAL, Fla. — SpaceX will try again to launch its robotic Dragon cargo capsule toward the International Space Station today (Feb. 19) at 9:38:59 a.m. EST (1438:59 GMT), and you can watch the liftoff live online.

Dragon was originally supposed to launch Saturday morning (Feb. 18), but SpaceX scrubbed the attempt with just 13 seconds to go on the countdown clock because of an issue with the second-stage engine of its Falcon 9 rocket.

You can watch the launch live here, courtesy of NASA TV, beginning at 8:45 a.m. EST (1345 GMT) Sunday. There will be a landing, too, if everything goes according to plan: SpaceX will try to land the Falcon 9's first stage on a pad a few miles south of the launch site, about 8 minutes after liftoff. [See video of SpaceX's previous rocket landing]

The liftoff will be SpaceX's first from NASA's historic Launch Complex 39A(LC-39A) at Kennedy Space Center, which the company leased for 20 years in 2014. The pad hosted most of the Apollo launches and many space shuttle launches, including the first and last ones (in 1981 and 2011, respectively).

Saturday's scrub was caused by an issue with the Falcon 9, not the launch pad or its relative unfamiliarity to SpaceX.  The company called the attempt off after getting a strange reading on the positioning of the rocket's second-stage engine nozzle.

Launch weather is still listed as 70 percent favorable, according to the U.S. Air Force's 45th Weather Squadron, with the only potential issue related to cumulous clouds.

If SpaceX is unable to launch this morning, the next launch attempt will be on Tuesday (Feb. 21), NASA officials said. Dragon contains about 1,000 lbs. (450 kilograms) of time-critical cargo that was loaded within 24 hours of the first launch attempt. That cargo, including mice in their habitats, stem cells and bacteria, can stay loaded until today's attempt, but would have to be unloaded and reloaded in advance of a later launch, agency officials confirmed.

In all, this launch to the space station will carry almost 5,500 lbs. (2,500 kg) of supplies, tools and science experiments to the crew of the orbiting lab, heavily balanced toward science investigations. The spacecraft will take two days to reach the station, where it will be grappled by station crew, berthed and unloaded. When Dragon returns to Earth after 29 days at the station, it will bring down nearly 5,000 lbs. (2,500 kg) of equipment and samples for analysis.

The liftoff will kick off SpaceX's 10th cargo mission to the International Space Station for NASA.