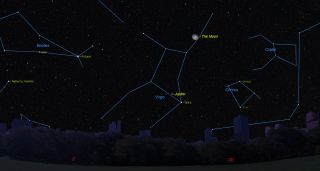 Jupiter and the moon will share a Valentine's night rendezvous late Tuesday, Feb. 14, 2017. This sky map shows where they will appear, weather permitting, in the late evening sky.
(Image: © Starry Night)

Jupiter, the largest planet in the solar system, has a celestial date with the moon tonight (Feb. 14), offering a lovely Valentine's night sky view.

Jupiter currently shines as a brilliant silvery "star" against the background stars of Virgo. It makes its first appearance low in the eastern sky shortly after 10 p.m. local time.

Currently, this giant planet is ready for telescopic observing soon after 1 a.m. (your local time), when it will stand roughly one-third of the way up from the southeast horizon to the point directly overhead (called the zenith). The gas giant reaches its highest position in the south around 3:45 a.m. and heads toward its setting in the west after sunrise. [Valentine's Day in Space: Cosmic Love Photos]

The waning gibbous moon will rise about 40 minutes before Jupiter tonight. Just before midnight, you'll readily see Jupiter sitting about 6 degrees directly below the moon. Your clenched fist held at arm's length is equal to roughly 10 degrees, so just over half a fist will separate Jupiter and the moon.

Moving across the sky at its own apparent diameter each hour, the moon will appear to approach Jupiter as the overnight wears on. By the break of dawn (about 90 minutes before local sunrise), the distance between the king of the gods and the goddess of the moon ("Luna") will have shrunk to less than 4 degrees. So we might call this a Valentine's night encounter between Luna and Jupiter (or, if you refer to their Greek monikers, Selene and Zeus).

By Wednesday, evening the moon will have moved well to the lower left of Jupiter.

And let's not forget Spica, the brightest jewel of Virgo — a bluish, 1st-magnitude star — that currently sits to the lower right of Jupiter and can only enhance the current celestial scene.

"Big Jupe" is the most consistently interesting object in the solar system after the moon and the sun, and has always held a special place in the hearts of telescope viewers. Not only can skywatchers see the planet's prominent cloud belts, but they can also use the smallest telescope— even steadily held 7-power binoculars — to view the four bright satellites of Jupiter.

These appear as tiny stars positioned nearly in line, changing their places in the line as they revolve around the planet in orbits nearly edgewise to Earth. When Jupiter is near the moon tonight, for example, skywatchers will see three satellites (Ganymede, Callisto and Europa) on one side of the planet, while the fourth (Io) remains all by itself on Jupiter's opposite side.

At 12:53 a.m. Eastern Time, Io will slip into Jupiter's shadow and will disappear, leaving only three moons in view. That will continue until 4:06 a.m. Eastern Time, when Io will reappear from behind Jupiter, placing all four satellites on one side of the planet.

And if clouds prevent you from seeing the moon pair off with Jupiter tonight, don't fret. You'll get a chance to see a repeat performance on the evening of Tuesday, March 14, when a nearly full moon, the planet Jupiter and Spica will form an isosceles triangle. Jupiter will appear to the upper right of the moon.

The gas giant will arrive at opposition to the sun on April 7 and will appear to climb higher in the evening sky in the weeks to follow. Once Jupiter rises above the horizon, the planet easily outshines Sirius (the brightest star in the sky) and every other point of light in the night sky, shining at a dazzling -2.2 magnitude on the brightness scale used by astronomers.

Editor's note: If you capture an amazing photo of Jupiter and the moon and want to share it with Space.com for a story or gallery, send images and comments in to managing editor Tariq Malik at spacephotos@space.com.

Joe Rao serves as an instructor and guest lecturer at New York's Hayden Planetarium. He writes about astronomy for Natural History magazine, the Farmers' Almanac and other publications, and he is an on-camera meteorologist for Fios1 News in Rye Brook, N.Y.Follow us @Spacedotcom, Facebook and Google+. Original article on Space.com.