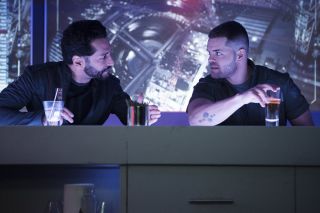 Amos and Alex, on the crew of the Rocinante, share a drink on Tycho base in an early episode of "The Expanse" Season 2.
(Image: © SyFy)

After a nail-biting first season full of rapidly shifting alliances, "The Expanse" returns to Syfy tonight (Feb. 1), so buckle up for a 13-episode space ride.

The science-fiction TV show, based on a series of novels by James S.A. Corey (actually Daniel Abraham and Ty Franck), explores the difficulties encountered when humans expand across the solar system and fracture into different factions.

Writer Hawk Ostby, one of the series' showrunners, told Space.com that he can't wait to get further into the story, now that the team has finished the show's fundamental "world-building" aspects. This particularly included establishing the culture of the Belters, a group that's native to the Asteroid Belt, over the course of Season 1. The season also delved into problems facing the other two factions, centered on Earth and Mars. [See "The Expanse" Season 1 Recap...with Cats!]

"Obviously, all the sides are heating up, and which tribe are you going to choose?" he asked.

Ostby assured fans of the novels that the TV writers will continue to "mix and match" elements from the books, saying that the writers are not forced to follow the novels' plot but enjoy doing so because it is compelling. That spirit drives the cast and crew of "The Expanse," who he said are uniformly hard-working and fans of the books.

"The crew has a shared vision, and it's so fun to go to work," Ostby said of his team. "These people are sort of like friends and family; we're going to come to work and we're going to do this."

Viewers will learn more about the crew of the Rocinante, including more about some of their secretive pasts. In particular, Amos Burton (played by Wes Chatham) is an Earth-born mechanic on the Rocinante — the ship that's piloted by the show's main protagonists — who has thus far chosen to hide his background. For the most part, Amos says little about what he used to do and focuses instead on maintaining his spaceship. Amos played a memorable role in the last episode of Season 1, and more will be revealed of his character in Season 2.

Chatham told Space.com that he first learned of the books while promoting "The Hunger Games" (in which he also co-starred) at San Diego Comic-Con a couple of years ago. Chatham was halfway through the first book when he got the casting call to be Amos, who was coincidentally his favorite character.

"He chooses to be out in deep space, isolated and alone with his machine," Chatham said. "That's where he feels most comfortable and that's where he kind of understands the world." He added that because Chatham is an actor who (like all actors) is constantly trying to please people, Amos is a refreshing character because he mostly doesn't care about others' opinions.

While being careful to avoid spoilers, Chatham said that he is excited to see what the audience's reaction to the second season will be, now that the crew is coming together.

"You can expect an amazing space battle — stellar, unbelievable," he said. Besides unraveling the mystery of Amos' past, he added, viewers can expect to learn more about the protomolecule, an infectious agent that was discovered in Season 1.