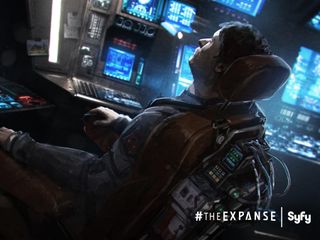 James Holden receives a mysterious distress signal onboard the ice ship "Canterbury," kicking off the events of "The Expanse," in this concept art for a pivotal moment in the show.
(Image: © Syfy.com)

The two authors of "The Expanse" book series, now a new Syfy TV show, were deeply involved with the look, feel and script of the new TV epic. Here, they discuss how they made it happen and the coolest tech and science elements of the show.

The new space adventure follows multiple factions from Earth, Mars and the Asteroid Belt on a grand scale as they teeter on the brink of war and fight to solve a solar-system-wide mystery.

Space.com talked with Abraham and Franck about their favorite technology in the show, how different kinds of gravity feel (and which are worst) and how they portrayed the vast distances of space. (We also talked with them here about the development process and their hopes for the show.)

Space.com: What's the coolest technology you have developed for the series?

Franck: In the book series, when we were coming up with the visuals for the ships and stuff, I was talking to a guy I know who works out of Los Alamos Labs. I was talking to him about the fact that the primary weapon on our ships is railguns — those big, electromagnetically fired weapons. And he said you can extend the length of a railgun barrel [by blowing] this plasma out, and you run electricity through the plasma.

I mentioned this offhandedly to our visual effects supervisor, and he was like, "That's amazing! We're totally going to do that." So there are these incredible shots in the show of a railgun getting ready to fire and this gas blowing out the end of the railgun, and then the whole thing lighting up and hurling [the projectile] through. That's my favorite thing in the show. [Trailer for "The Expanse"]

Abraham: The thing that I think I like the best about how we did it — and understanding the technology behind this is made in some ways of "handwavium" — is the three kinds of gravity that we wind up with. Instead of having the gravity plating and the artificial gravity and the ships that are laid out flat like ships, having thrust gravity and spin gravity and ships that are built like towers. […] Up in the writers' room, there's a little picture they've posted with all the different kinds of gravity on it.

Space.com: So, gravity caused by different sources — spinning versus accelerating versus the pull of a planet — feels different in your series?

Abraham: Spin gravity you can [feel] because you've got the Coriolis effect [when mass in a rotating system feels a pull sideways as well as down], and you get nauseated if you get too close to the center of spin.

Franck: The closer you get to the point of spin with spin gravity, the more you feel the pressure as diagonal or sideways than as straight down; that messes with your inner ear.

Abraham: You know the rides you used to get in on the midway, where it spun real fast and pressed you up against the wall? That's what it is — that force pressing you into the wall is spin gravity. And I would have just never stopped puking. Never.

Acceleration gravity I don't think is something that you can tell from mass gravity in the frame. I don't think there's any way of doing that. [6 Everyday Things that Turn Strange in Weightlessness]

Franck: That's just when you go up in an elevator and you feel yourself getting pressed against the floor of the elevator — that's all that is.

Abraham: Only a really fast elevator for a really long time.

Franck: Well, space is big. It's much bigger than you think.

Space.com: What are some ways you conveyed that size in your story?

Franck: We have it take a long time to travel between places, even when you're going really fast. One of the things that shows up in the show is how long it takes a message to get somewhere. We actually used it as a plot device in the show because radio only goes the speed of light, so if you're trying to talk to a ship out by Jupiter, it might take 45 minutes for your message to get to them. Then, they send you a reply; it takes another 45 minutes. You've got an hour-and-a-half wait before you find out the answer to your question, which — when you're looking at it in terms of military engagement — is huge.

Abraham: This is more in the books than in the show — the military engagements take a long time. When you have fired off torpedoes from millions of kilometers away, you get to sit there and watch them coming for a while.

Franck: Episode 4 of the show does a good job with that. A bunch of ships are attacking another ship, and they all fire missiles. And then, they're talking — you can see on the map the missiles slowly passing each other, and they're having more conversations. And then, we see this great outside shot, where the camera is showing one group of missiles. And then, you see the missiles pass each other in space, and they're all going really fast. But then, we cut back inside the ship and [the crewmembers are] still standing around, having a conversation, drinking tea. That sense of the scale of everything, how far apart everything is — I think they do really well with shots like that. Also, when the captain mentions that the ships coming to attack them have been decelerating for two days to get in range — they started from pretty far away.

Abraham: One of the things that I think sometimes gets lost in the cuts — because you don't want to have a whole lot of time on the TV show showing people sitting there uncomfortably for minutes on end — is the amount of time that we are covering in the commercial breaks and between cuts on the show. It's easier in the books to say, "Three weeks later…"

The fourth episode of Syfy's "The Expanse" premiers Tuesday (Dec. 29) at 10 p.m. EST. This interview has been condensed for clarity.