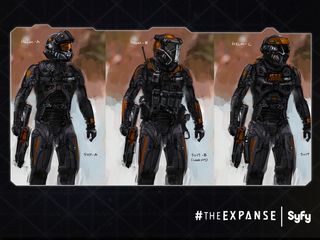 The duo behind "The Expanse," the space adventure series turned newest Syfy epic, sat down with Space.com to discuss the story's creation, its many different forms, working on the show and writing space's biggest threat.

Episode 4 of the 10-episode series, which follows the interactions and politics of humans from Earth, Mars and the Asteroid Belt, airs Tuesday (Dec. 29) on Syfy at 10 p.m. EST.

Daniel Abraham and Ty Franck, the authors of the book series, go by the pseudonym James S. A. Corey. (Space.com also talked to the duo about the best tech in the show, different kinds of gravity and portraying the vastness of space in a discussion here.)

Space.com: I've read that the initial concept for the books was actually a video game. Is that right?

Ty Franck: The fleshed-out version of the idea started out as that. I'd had the idea before that, but when a friend of mine asked me to help her come up with a pitch for a video game is when I really sat down and put more flesh on the bones of this idea that I had. It existed before that, but it was sort of nebulous. The video game thing is what really kind of solidified it. [SyFy's 'The Expanse' in Awesome Pictures]

But as soon as they realized how expensive making an MMO [massively multiplayer online game] was, they sort of backed away quietly.

Space.com: What happened to the story next?

Franck: It went from a video game to a pen-and-paper RPG [role-playing game] setting because I wanted to keep playing around with it. And then Daniel did the rest.

Daniel Abraham: I was in Ty's tabletop game, and I saw the amount of work that he'd done with the background and world building. And I'd written probably six or seven novels at that point, so my pitch was, "Look, you've already done all the hard work; let's just write it down, and it'll be a book."

Space.com: Are the main characters in the books from that RPG session? Are the major storylines the same?

Franck: Some of them are. Daniel's character in the game was Detective Miller. […] You would recognize it, but it is very different. You can't just transcribe your D[ungeons] & D[ragons] game and make a fantasy novel. It just doesn't work, and I knew that even before I started working with Daniel, so that was not a thing I had to be told.

If you read the game, you would recognize the bones, but the flesh is very different.

Space.com: Were the distinctions between the Belters, who live on the Asteroid Belt, and the people who grew up on planets in the original concept?

Abraham: I think that was in there from the beginning, and that sense of political disenfranchisement based on that — and all of that was part of the world building that hooked me in the first place.

Franck: When you started the game, you would either start as an Earther or a Martian or a Belter, and the three factions would be in this constant state of low-level warfare with each other. Right from the beginning, that was all set up.

Space.com: And now, after the story's popularity as a book series, it's transitioning again — to a TV show. You've remained very involved with the show's production, right?

Abraham: Once we had agreed to sell the option […] we had no actual standing or power. At that point, we had signed away our rights. And traditionally, at that point is where the author vanishes forever from the scene and has no further input or anything until it actually hits air and somebody asks if they're happy or not and they're contractually obligated to say they like it. But in our case, [executive producers] Mark [Fergus] and Hawk [Ostby] and the folks at Alcon [Television Group] and the folks at Syfy were really interested in having us involved in it.

Franck: Our contract makes us producers for the life of the show. But that is often true for authors, and it's sort of a courtesy title. They don't have to let you be involved even though you're a producer. It's worked out very differently for us.

Space.com: What would you say would make the show a successful adaptation of the book series?

Abraham: So I have this whole rant about retelling stories and what's interesting about taking a story that already exists and then doing it again. […] The show is a retelling of "The Expanse" the way that the books are, and as long as it's good and it's the same story, I'm delighted.

Franck: I think retelling with different focuses and details can be interesting. And as society changes, and the things we care about change, if we keep telling the old versions of stories, they start to feel out of date and not as compelling. I love old stuff, and I love reading and watching old stuff, but I'm also open to the idea that there are new ways to tell old stories.

One of the things I'm glad about with the adaptation is that the underlying theme of the books — the idea that when we go out into space, the problems we're really going to find out there are the ones we pack with us, and that ultimately, there's probably more to admire in humanity than despise — those have made the jump to the new medium, and I'm glad that they did.

Space.com: As it progresses, will the story stay focused on the human element or become more concerned with outside forces?

Franck: I've come to realize that maybe all of this is because I was raised on the [George A.] Romero zombie movies. The thing that is true about the Romero zombie movies is, no matter how many zombies there are, the biggest threat is always other humans. That sort of sense that you go into space and space is deadly, because there's no air, and there's no heat […] a little hole in the ship, and you could die. All the things that could go horribly wrong in space, I honestly believe, once we get to that point, we're still going to be our own biggest problem. Like Daniel said, the problems we carry with us will always be the worst problems we have.

This interview has been condensed for clarity.