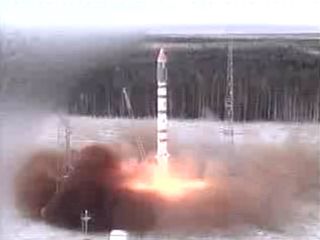 SSETI Express, a satellite designed and built by European university students, launched on 27 October 2005 at 2:52 EDT from the Plesetsk Cosmodrome on a Russian Cosmos 3M launcher.
(Image: © ESA.)

TEHRAN, Iran (AP) -- An Iranian rocket launchedover the weekend that soared to the edge of space was intended for research, anIranian space official said, in comments that appeared intended to show thatthe program is aimed at launching satellites, not missiles.

Iran did not say what research therocket was carrying out, but the announcement of Sunday's launch underlined thecountry's ambitions at a time when the United States and others fear it istrying to develop nuclear weapons and a greater ballistic missile capability.

Iran initially announced that it hadlaunched a "space rocket'' on Sunday. But the deputy head of Iran's Space Research Center, Ali Akbar Golrou, later in the day clarified that the rocket did notreach orbit level and was carrying a research package.

He said therocket was built to soar to a maximum altitude of 93 miles. Space is consideredto begin at 60 miles. Ham radio satellites -- the lowest flying satellites --orbit between 100-300 miles, while communication, weather andglobal-positioning satellites fly between 250-12,000 miles up.

Golrou didnot specify how high Sunday's rocket actually went. He said the launch "wasaimed at improving science and research for university students.'' His commentssuggested the rocket was a "sounding rocket,'' used to conduct high-altitudemeasurements and testing.

Iranianofficials have said the country wants to launch a satellite on an indigenousrocket and indicated they are developing a Shahab-4 missile to do that.

EphraimKam, a strategic analyst at the Institute for National Security Studies at Tel Aviv University, said it was known that the Iranians were seeking to develop rocketscapable of putting satellites into orbit.

If Sunday'slaunch was successful, it could show Iran is developing a capability to buildlonger-range missiles able to reach Europe.

"If this istrue, it has more significance for other countries, for Europe, than it doesfor Israel. They have already had missiles that can reach Israel for several years,'' Kam said.

Iran's powerful ballistic missile, theShahab-3, is believed to have a range of around 900 miles, putting Israel and much of the Middle East in range.

The rocketlaunch came at a time of increased tensions between Iran and the West over itsnuclear program, which the United States and some European countries fear aimsto produce a nuclear weapon. Iran denies the claim, saying its nuclear programand its space program are both peaceful.

The UnitedNations in December imposed trade sanctions on Iran, banning the sale of goodsconnected to its nuclear and ballistic missile programs after Tehran rejecteddemands it suspend part of its nuclear program. Unlike Iran's nuclear program, though, there has been no concerted international attempt to endthe country's space program.

In 2005 Iran launched its first commercial satellite on a Russian rocket, in a joint project with Moscow, which appears to be the main partner in transferring space technology to Iran. Iran signed a $132 million deal with a Russian firm in 2005 to build and launchanother telecommunications satellite.

"Investmentin space is very serious and requires time, but we are trying to speed thisup,'' IRNA quoted Soleimani as saying.

Iran hopes to launch four moresatellites by 2010, the government has said, to increase the number of land andmobile telephone lines to 80 million from 22 million. It also hopes to expandits satellite capabilities to increase Internet users to 35 million from 5.5million in the next five years.