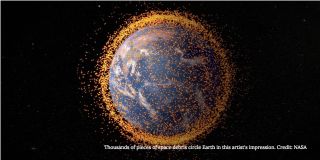 "There is an erosion of some of the commonly accepted standards and norms, and there's concern about that as folks around the world have tried to find advantage, find seams," said Winston Beauchamp, the deputy undersecretary of the Air Force for space. "That's part of the reason why we want to codify our norms and behavior in space because it is such an important domain, not just for us but for humanity."

Speaking at a Nov. 17 summit hosted by the Defense One website, Beauchamp said that the danger of collision and debris in orbit means that nations must work together to avoid those risks, even if they have somewhat tense relations – such as between the U.S. and Russia or U.S. and China. [The Worst Space Debris Events of All Time]

"We need to be able to operate in space both to advance our state of technology and eventually get the human race off this planet onto another planet," he said. "We can't do that if we have to try to fly through a shell of debris."

Rear Adm. Brian Brown, head of the Navy Space Cadre, said that norms often develop over time, and that the U.S. is leading on developing them.

"Much like the maritime laws that we have, they established over time by safe and responsible behaviors and patterns of life," he said. "That is something we are pushing for in a lot of different areas, so we don't have miscalculations in space."

Because of the long-lasting effects that could come from destroyed satellites and the resulting debris, the U.S. military is taking a defensive mindset, said Brown, the deputy commander for the Joint Functional Component Command for Space at U.S. Strategic Command.

"Everything is about not having a war extend to space," he said.

Even in peacetime, to avoid collisions the U.S. is warning satellite companies and other nations when there's a risk of collision, Brown said.

"There are norms and behaviors that are already out there that the U.S. is leading on," he said. "If you look at basic safety of flight things that we do today, there are specific standards for low Earth orbit and geosynchronous orbit where we provide conjunction warnings if two satellites, or a satellite and a piece of debris, come within proximity."

Were another nation to attack U.S. assets in space, Beauchamp said the Pentagon wouldn't automatically respond in kind.

"It's important to note that if something were to happen in space, our response wouldn't necessarily be in space," he said. "If someone were to do something, we would respond in a time and place of our choosing, primarily because we wouldn't expect something to happen in space in isolation. It would be an extension of some conflict that would be occurring terrestrially."