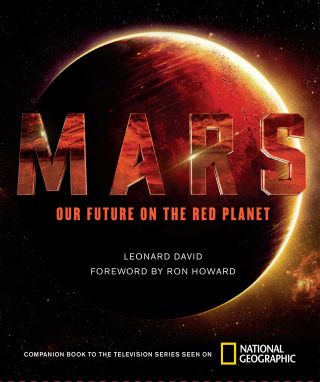 Sending people to Mars won't be easy, but the journey isn't entirely out of reach. A new book published by National Geographic explains how the human race can conquer the challenges of getting to Mars and thriving on the Red Planet, blurring the lines between science fiction and reality.

In the new work, "Mars: Our Future on the Red Planet," award-winning journalist (and Space.com contributor) Leonard David takes readers on a journey to the future to show what it would take for people to travel to Mars and not just survive, but also prosper in the new world.

"It's dangerous. It's going to be hard to do," David said in an interview with Space.com. "Not only [to] survive Mars, but [also to] thrive. And the thrive part — that's where some hard discussion and technological development is going to happen."

Along with technical details and philosophical discussions about the human journey to Mars, David's book features large, colorful images of the Red Planet as well as historical photos of humanity's previous endeavors with space exploration. It even includes some images from the National Geographic Channel's "Mars" television series alongside commentary about the new show.

With the eye-catching cover and gorgeous images alone, this book would make a great addition to any space lover's coffee table. But the real meat of the book lies in the content of its text.

In the foreword to the book, Ron Howard, executive producer of "Mars," wrote that the series "tell[s] the story of colonizing Mars looking back from the future, with the premise that we've already gone to Mars and this is what it took to get us there." ['Mars': The Epic National Geographic Channel Miniseries in Pictures]

The docudrama intertwines a theatrical reenactment of the first crewed mission to Mars with expert interviews.

David's book also incorporates interviews with some of those Mars experts, such as:

The book not only examines the technological challenges of going to Mars, but also looks at life-science issues, psychological and philosophical issues, and even some of the ethics involved, David explained. Developing the technology to get to Mars is just one of the many challenges that humans will face in future missions to the Red Planet, David's book explains. Both the book and the new television series aim to represent those challenges as accurately as possible.

In the foreword to the book, Howard wrote that he is "very appreciative to National Geographic for being incredibly rigorous in its demand for authenticity and scientific accuracy. The level of vetting around the engineering and hard science throughout the scriptwriting process is something that we are proud of — and it's part of what makes this series unique. This isn't science fiction at all. It's real science."

Buy Mars: Our Future on the Red Planet on Amazon.com