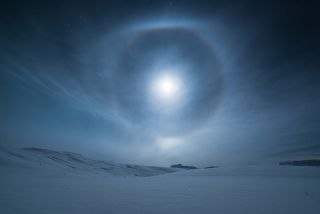 "A mesmerising lunar halo forms around our natural satellite, the Moon, in the night sky above Norway. The halo, also known as a moon ring or winter halo, is an optical phenomenon created when moonlight is refracted in numerous ice crystals suspended in the atmosphere."
(Image: © Copyright Tommy Richardsen)

It's that wonderful time of year again, when the Royal Observatory Greenwich releases the shortlist of entries into the Insight Astronomy Photographer of the Year competition.

While we expected these photos to be just as stunning as the entries from previous years, it's impossible to anticipate the way these snapshots take our breath away. This year's entrants include views of objects in deep space, snowy landscapes under starry skies, and glowing green auroras lacing through the atmosphere.

To see all 30 of the shortlisted entries, check out our full gallery here. In the meantime, here are a few of our favorites:

The Insight Astronomy Photographer of the Year is run by the Royal Observatory Greenwich in association with Insight Investment and BBC Sky at Night Magazine. This is competition's eighth year, and it received "a record number of over 4,500 spectacular entries from enthusiastic amateurs and professional photographers from over 80 countries spanning the globe," according to a statement from the observatory.

The photo titled "Crystal Brilliance," taken by Tommy Richardsen of Norway, captures a scene that almost looks supernatural. The ring of light around the moon is a lunar halo.

"The halo, also known as a moon ring or winter halo, is an optical phenomenon created when moonlight is refracted in numerous ice crystals suspended in the atmosphere," the caption reads. Richardsen snapped the photo in Norway.

We always love a photograph of the elusive northern (and southern) lights, which are highly hypnotic no matter what they're up to.

Photographer Lee Cook from the U.K. snapped a photo of a lonely hut at the foot of snowy mountain, while using a long exposure to also capture the rotation of the celestial sphere overhead. He titled the piece "Alone."

"With temperatures close to -15 degrees [Celsius, or 5 degrees Fahrenheit], it's not surprising that the photographer was the only soul in the vicinity of Plateau Hut in Mount Cook National Park, New Zealand," the photo caption reads. "The lonely hut, dwarfed by the snowy mountains of the park, contrasts with the abundance of star trails seemingly encircling the peaks of the Anzac."

"About 12 million light-years away from our planet, lays the starburst galaxy M82, also known as the Cigar Galaxy," the photo caption reads. "In a show of radiant red, the superwind bursts out from the galaxy, believed to be the closest place to our planet in which the conditions are similar to that of the early Universe, where a plethora of stars are forming."

In what looks like a whimsical cosmic game of tag, seven sparkling sisters (the Pleiades) trail behind the glowing green dot of a comet. "The Joy of Seven Sisters" was taken by José Francisco Hernández Cabrera of Spain.

"Comet Lovejoy flashes through the darkness of the Solar System, passing near the open star cluster of the Pleiades or Seven Sisters," the photo caption reads. "The Pleiades glow blue due to their extremely hot nature, and are the most obvious star cluster to the naked eye in the night sky."

And who could resist throwing in another photo showing a wintertime scene: "Frozen Giant," by Nicholas Roemmelt of Germany, captures a gorgeous geologic feature crowned by the bright band of the Milky Way.

"The celestial curve of the Milky Way joins with the light of a stargazerꞌs headlamp to form a monumental arch over the Cimon della Pala in the heart of the Dolomites mountain range in northeastern Italy," the caption reads.