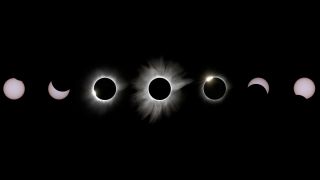 Justin Ng led a group of eight first-time eclipse photographers when he captured the images for this eclipse collage early on March 9 in Palu, Indonesia. He took the photos with a Canon 7D at 400mm with a DIY solar filter.
(Image: © Justin Ng)

If you long to see the Earth from an astronaut's perspective, explore the wonders of the cosmos, delve into space history or capture your own vivid views of the sky, a book about space photography could hold just the picture. Here are Space.com writers' and editors' picks for photo collections and astrophotography books that will transport you to other worlds.

(We are constantly reading new and classic space books to find our favorite takes on the universe. Our recently-read books in all categories can be found at Best Space Books. You can see our ongoing Space Books coverage here. If you capture a spectacular image of the sky that you'd like to share with Space.com and our news partners for a possible story or photo gallery, send an email to Space.com managing editor Tariq Malik at spacephotos@space.com.)

By J.L. Pickering and John Bisney

In the new book “Picturing Apollo 11: Rare Views and Undiscovered Moments,” (University Press of Florida, April 2019), spaceflight historian J.L. Pickering and journalist John Bisney paint an incredible, vivid picture of what it was really like to be a part of the Apollo 11 mission. The book features a wealth of images from 1969, primarily from January through the lunar landing in July, which show lesser-seen scenes from the Apollo program. From difficult training moments to mundane meetings, the images in this book really humanize the larger-than-life Apollo 11 astronauts. It is easy to look back at Apollo 11 through a romanticized lens, but this book makes it clear just how gritty, funny and real the mission really was.  ~Chelsea Gohd

Read more about "Picturing Apollo 11" and page through some of its photos here.

Picturing Apollo 11
Amazon
$30.12
View
We check over 130 million products every day for the best prices

Scott Kelly spent a record-breaking 340 days on the International Space Station, taking tens of thousands of images of the planet spinning below — making him the perfect guide to show off the wonders of Earth. This new large-format photobook combines images he took of the Space Station and Earth with super-zoomed-in views of unusual parts of the planet's surface, as well as photos of his launch, landing and other parts of the historic mission. The book combines large, colorful images with Kelly's descriptions of the mission and interesting Earth features, and it makes a great companion to his recent memoir "Endurance" or a good stand-alone showpiece. ~Sarah Lewin

Kelly guides Space.com through some of his favorite photos and talks about the book here; look through a short gallery of photo picks here.

Infinite Wonder: An Astronaut's Photographs from a Year in Space
Amazon
$18.45
View
We check over 130 million products every day for the best prices
View All Deals

British astronaut Tim Peake's photo book takes its name from an unusual moment during his six months on the International Space Station — he tried to call his family on Christmas Eve in 2015, but dialed the wrong number instead, confusing the answerer with an unusual greeting: "Hello, is this Planet Earth?"

The book is filled with Peake's favorite photo selections of night and day, oceans and rivers, mountains and deserts,  towns and cities, and the Earth overall, as well as the satellites, cargo craft and other gear that made appearances during his time on the space station. His images are interspersed with descriptions of how he captured the photos and anecdotes about his time in space. ~Sarah Lewin

Read more about the book here, and see a gallery of some of the book's images here.

NASA astronaut Don Pettit's stunning space photographs fill the pages of "Spaceborne," a glossy photo collection that spotlights the ever-changing Earth, streaking stars and the details of the International Space Station. Over the course of Pettit's three space missions, he captured hundreds of thousands of photographs documenting an astronaut's view — and the best of them are collected here.

Pettit's photographs of cities at night feature alongside Earth's natural wonders, auroras and glowing atmosphere, often framed by the space station's outstretched solar panels and modules. Long-exposure photos create psychadelic streaks on Earth and whirling star trails above, taking full advantage of an astronaut's unique vantage point, and Pettit talks readers through the sights and how he captured them. ~Sarah Lewin

In "Abandoned in Place," photographer Roland Miller takes readers on a tour of abandoned facilities that once served NASA's human spaceflight program. The images of unused launch towers, empty science offices and antiquated technology are visually striking, and carry the ghosts of long-gone missions. Miller is a photographer and teacher by day, but he has been photographing unused NASA facilities for thirty years as a side project. Some of the sites featured in the book — particularly those at Cape Canaveral, Florida — are being quickly eroded by saltwater, and Miller, a child of the Apollo era, said he started to feel a sense of obligation to preserve these monuments, which stand as a symbol of one of humanity's greatest accomplishments. ~Calla Cofield

Read more about the book and see its haunting images here, and read an op-ed by the author here.

Abandoned in Place
Amazon
$29.97
View
We check over 130 million products every day for the best prices

Packed from cover to cover with stunning images taken on the ground and in space, "Infinite Worlds" tells the story of STS-125, the last crewed mission to repair the Hubble Space Telescope. Photographer Michael Soluri  was granted nearly unrestricted access to the mission program leading up to the launch, and the behind-the-scenes images will thrill NASA fans. These masterful photographs capture the bare reality of preparing for a crewed space mission. The book's text includes essays by the astronauts and other mission staff. It also features images taken by the crew during the mission, and of course, images by the Hubble telescope. This is a fantastic addition to any spaceflight book collection. You can see photos from "Infinite Worlds" here  or watch a video of Soluri discussing the book  and Hubble.

Infinite Worlds
Amazon
$25.03
View
We check over 130 million products every day for the best prices

Chris Hadfield made a name for himself on social media during his five-month stay on the International Space Station in 2012-2013 by tweeting from space, recording humorous videos and even playing guitar. The Canadian astronaut, like most visitors to the space station, also took innumerable photos looking back down at Earth.

In "You Are Here: Around the World in 92 Minutes," Hadfield has compiled his favorite photos into one tour over the surface of the Earth as seen from space. Besides describing what's happening in the photos, he also compares them to more commonplace sights: desert sand like the storms of Jupiter, sprinkled icing over Australia, the "Eye of the Sahara" and more. On the heels of "An Astronaut's Guide to Life on Earth" (Little, Brown, 2013), which offers advice and anecdotes from space, this book takes a step back and lets an astronaut's view (mostly) speak for itself.  ~Sarah Lewin

Watch a video interview with Hadfield about the book here.

You Are Here
Amazon
$16.76
View
We check over 130 million products every day for the best prices

"Planetfall: New Solar system Visions" is an oversized tome filled with page after page of alien landscapes — its pages tour Earth, the moon, the sun, Mars, Jupiter, Saturn and the asteroids and comets that inhabit our solar system. Author Michael Benson, who published two previous books of celestial images, created the images by processing raw spacecraft data to reproduce what the human eye would see from each viewpoint in space.

The book is a celebration of the robotic probes and astronaut photographers that have set out to explore the solar system, and the enormous images put the viewer right among the dunes of Mars, on the Moon with Earth peeking over the horizon and alongside a tiny, steam-ejecting moon among the rings of Saturn. And as alien as those vistas look, it's surprisingly easy to feel like you're standing right there. ~Sarah Lewin

We're adding to these lists all the time; check back later for the latest space photography books!