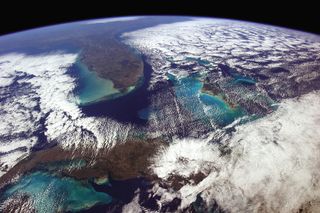 When astronauts have three minutes to spare between experiments and other duties on the International Space Station, they usually float over to the cupola, a dome with seven windows facing Earth, says Canadian astronaut Chris Hadfield.

Hadfield never tired of the view from 250 miles (400 kilometers) above the planet. During his last mission, which ran from December 2012 to May 2013, he took an astonishing 45,000 photos of Earth from space. He shared a fraction of those images in real time with his followers on social media. And since he's had months to sift through his collection, Hadfield was able to pick 150 of his favorites for a new book in stores today (Oct. 14), "You Are Here: Around the World in 92 Minutes" (Little, Brown, 2014).

Hadfield writes that he wanted his photos to have a "human element." In the book, he often presents striking, abstract views of Earth alongside something familiar. Hadfield teaches us to see a sprinkling of icing sugar over Australia, storms of Jupiter in desert sands and the mouth of a whale on an English coastline. Here's a sample of the photos that can be found in the new collection.

Hadfield captured this twist of clouds near Arica, in the northern edge of Chile. He explains: "You see these frequently in this part of the world because the Pacific is cold, the land is warm, and the currents and winds combine to form a cloudy vortex — clockwise here, because it's the southern hemisphere. North of the equator, the spiral would turn counter-clockwise." CREDIT: Chris Hadfield/NASA

Hadfield saw a wolf's head in the evaporation ponds in Utah's Great Salt Lake. "The largest saline lake in the western hemisphere attracts pastel-colored algae, brine shrimp and the birds that love them, but so far, just this one lone wolf," he writes. CREDIT: Chris Hadfield/NASA

The Richat Structure in Mauritania, sometimes called the "Eye of the Sahara," will instantly orient your gaze if you're lost above the 3.6 million-square-mile desert, according to Hadfield. "Oddly, it appears not to be the scar of a meteorite but a deeply eroded dome, with a rainbow-inspired color scheme," Hadfield writes. CREDIT: Chris Hadfield/NASA

Coffee and sugar plantations once lined the Rio Tietê in Brazil, but many of the farms were submerged after the river was dammed in the 1990s to create a hydroelectric power plant. Here, some might just see flooding. Hadfield sees a giant millipede crawling on the face of the planet. CREDIT: Chris Hadfield/NASA