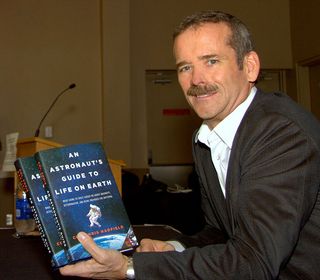 Canadian astronaut Chris Hadfield holds up copies of his book, "An Astronaut's Guide to Life on Earth."
(Image: © Starport/Jami Lupold)

If you're wondering what gift to get the astronauts aboard the International Space Station this holiday season (and if not, why aren't you?), you can rule out a certain bestselling book.

"This is 'An Astronaut's Guide to Life on Earth,'" Canadian astronaut Chris Hadfield said. "It is for reading before and after, I think, not while you are in space."

For the rest of us Earthlings though, Hadfield's "Guide" is fair game — as many have already found out. [Astronaut Chris Hadfield in Space: 8 Amazing Moments]

Since being released a month ago, the book has launched to be the top of the lists in Canada and has ranked in the top 20 books selling in the United States.

"It's selling as the number one or number two book in U.S. business books and U.S. self-help and consulting books, which I'm really happy about," Chris Hadfield told collectSPACE.com in an interview earlier this month. "I don't think it is selling because it's an astronaut's memoir or that it contains cool stories. It is selling because it has worthwhile content."

SPACE.com partner site collectSPACE.com caught up with Hadfield, who is traveling on a multi-nation book tour, to talk about the "Guide," why he wrote it and what he hopes readers take from his advice.

collectSPACE.com: "Astronaut's Guide" went on sale Oct. 29, less than six months after your return to Earth after commanding the International Space Station. Does that mean you wrote the book while circling the planet?

Chris Hadfield: Well, it's an "Astronaut's Guide to Life on Earth," and it was written on Earth.

I wish I could have had the time, but there just wasn't time to write a book while I was in orbit. I had a bunch of it laid out before, and of course the experience of being in space was so rich that there was all types of stuff to add to it afterwards.

Books get written in bursts and stages, but I first started thinking about it 10 years ago and started laying out what I might put in. Many years ago, I wrote out notes on how I thought the book should go.

And then my wife and I were talking about it, maybe three or four years ago, that I should really do it, and it would make sense affiliated with when I finished flying in space. I started working on it in earnest about two years ago.

collectSPACE.com: Why a guide rather than autobiography?

CH: What happened to me is interesting to me, but what really matters is what does it mean to someone else.

What happens in space is inherently, I think, interesting to people — but it can be sort of like watching a juggler. It is fascinating to watch a juggler, but what does it mean to me? It is entertaining.

Spaceflight is entertaining, as well as important.

All of the importance [of spaceflight] is in how it affects the people and what it means to us, as an individual or as an industry or as a people. So, it is really about how you bring it back and make the experience as relevant that matters at all.

I never intended to write an autobiography. The book is not intended as an autobiography at all, or even a memoir. It is really just a distillation of all the talks I have given for the past 21 years. People are interested in space, and I enjoy the experiences and I talk about them, but always my purpose of my talks and the underlying reason that I am talking to them is to try to bring it back to, Why does this matter? [Watch SPACE.com's Interview with Chris Hadfield]

Why does this matter? What is the good in it? How does this change your decision-making and your understanding or your perspective such that it accomplishes something?

So it occurred to me a couple of years ago while [my wife] and I were out walking the dogs, it really is an "Astronaut's Guide to Life on Earth," and that's where all of it comes back to being worth talking about.

collectSPACE.com: You coin a number of phrases in the Guide, such as "Have an Attitude," "Sweat the Small Stuff," and "Aim to be a Zero," that come across in their use as almost like an astronaut's checklist. Was that your intention?

CH: When I have a complicated system, say like the T-38 [jet] hydraulics, or the Soyuz [capsule] motion control system, the way I have learned over the last 40 years, to truly understand it, is to distill it down to a one-pager where all the information I need is written down on one 8.5-by-11-inch piece of paper.

It serves me two purposes. One, it forces me to condense my thinking into what really matters so I have the relevant nature of it. The other is, it serves as a quick reminder. So when I am getting ready for a sim[ulation], or I'm flipping through things getting ready to go to space, I can look at this page — and sure, it's got the information on it — but to me it helps me remember the details that are significant to me.

When I was writing the book, I tried to write it in the same vein. You could write a long paragraph on a topic, but if you do not give someone an easy way to remember it, it can get a little bit lost. I tried to distill in just a few words something pithy or key about the idea so that it would be easier for people to remember.

Then hopefully the next time they are faced with a scary situation, or a complex leadership situation or a change in their life, those few words will pop into their head — "I'm climbing down the ladder, that's what is happening here," and then the content of the idea will flow naturally from their initial triggered thought.

It works for me, and it has really been the only way I have been able to memorize and internalize all the complex things I have had to remember over the years. And it was almost a product of the book itself. When I started writing a chapter, I would refer to the chapter in my mind by that little, quick summary thing because it helped keep me on topic.

For more information, or to order a copy of "An Astronaut's Guide to Life on Earth," see chrishadfield.ca.