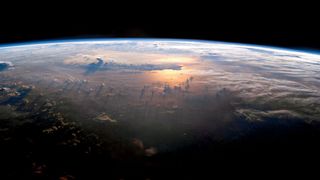 Sunset on the Pacific as seen from the International Space Station at an altitude of 235 miles. ISS 007 crew, July 21, 2003.
(Image: © Image Science and Analysis Laboratory, NASA JSC/Michael Benson/Kinetikon Pictures. © All rights reserved.)

Stark deserts, spewing geysers, and streaming plasma are just some of the alien landscapes pictured in the new book "Planetfall," by Michael Benson (Abrams, October 2012).

Benson, a writer, photographer and filmmaker, is the author of two previous books showcasing the beauty of the universe. His newest entry presents locations throughout the solar system captured by robotic probes and human astronauts. Benson created these photographs by processing raw spacecraft data to produce images most closely resembling what the human eye would perceive if it were there.

Many of the "Planetfall" photographs will be showcased at upcoming exhibitions at the Hasted Kraeutler gallery in New York (Dec. 13 through January) and at the art gallery of the American Association for the Advancement of Science in Washington D.C. (opens in January).

SPACE.com spoke to Benson about his passion for the solar system, for true-color photos, and for the enigmatic moon Europa. [Planetfall: Wonders of the Solar System (Photos)]

Q: Why is the book called "Planetfall"?

A: The title really stems from an experience I had in the summer of 1989, when I sailed across the Atlantic in a 38-foot sail-boat, which took almost a month. I had the amazing experience of feeling that visceral sense of arrival — of relief, and renewed possibility — that happens when you see a smudge of land on the horizon after weeks of seeing nothing but sometimes very treacherous water.

That visceral sense of what landfall means, even existentially, that sense of relief on arrival, is directly behind my titling the new book 'Planetfall.' Because you can easily imagine a similar experience, maybe even more intense, after a long trajectory across empty space to another world.

Q: Which picture strikes you as the most strange or alien?

A: I were to choose only one, the color composite mosaic of Saturn's satellite Enceladus on page 187 is probably a good candidate. This, to my knowledge, is the first color view of the entire moon in which you can see the geysers of water shooting up into space from the south pole of the moon. The longer I worked on it, the more it reminded me of something, but I wasn't sure what.

It began to dawn on me that with its strangely vein-like surface features, its dual-source lighting, and its eruptive prominence up top, Enceladus is in an uncannily visual sync with Swiss designer H. R. Giger's creepy, extraterrestrial egg — the one depicted on the poster for the first 'Alien' film. It's all there: the veiny, egg-like, somehow organic surface; the weird eruption from cracks at the top; the flawless cinematic lighting.

In space, nobody can hear you scream.

Q: How do you make these images from the raw data?

In order to make a color picture from raw spacecraft data, the spacecraft has to have taken images of the same area of the same subject through two or more filters, and at about the same time. Ideally, these are red, green and blue filters, and then you can make an RGB color composite relatively easily.

In practice, sometimes you only get a couple filters that are within the spectral range we call visible light, meaning what would be seen by the naked eye. Remember, these missions exist in the first place in order to be tools of scientific discovery, so infrared or ultraviolet filters, or various other filters outside the spectral range of human vision, are frequently used. In those cases, a more tricky kind of processing is involved, in order to get a worthy true-color image.

And there's another factor, which is spacecraft movement. Because multiple shots need to be composited, and because typically a spacecraft is in motion, there can be problems aligning those two or three frames, even if they were taken within minutes of each other.

But you know what? The whole image production process is not that hard once you get the hang of it, and it's very rewarding.

Q: How "true" are these photos? Are they what the human eye would really see if we were there?

A: I always bring color photographs as close as possible to what a concatenation of sources and methods indicate we would see if we were there. I then feel free to exercise the tools every photographer has at his or her disposal, meaning I tweak contrast, play with tonalities, and do all the things necessary to make an image that has a claim to entering the canon of photography.

With this work, I'm attempting to make the case that the visual legacy of spaceflight constitutes an important chapter in the history of photography.

Q: Why do you make true-color photos, as opposed to the false-color space images we often see?

A: I'm very much against false color views of the planets, even if they can be useful in illustrating this or that scientific discovery. They can be very misleading, because the general public can take them for what they would actually see if they were there. My goal with this work is to provide a close simulacrum to what you or I might see if we could go.

Q: Which solar system destination would you most like to visit, assuming you had a suit and vehicle that could protect you anywhere?

A: Oh, definitely the Jupiter system, which is just so endlessly awesome.

I mean, you have this gargantuan stormy gas giant with its baleful vast red eye, staring across the solar system like a Cyclops. And it's spinning so fast that the equator bulges, and its clouds are smeared into writhing, streaming, boiling bands.

Just that alone is just an endlessly kinetic show, but consider Jupiter's four large satellites. For example, the innermost, an orange-yellow firecracker named Io, looks a bit like Yellowstone National Park morphed into a sphere, and stands out as one of the solar system's most idiosyncratic places. Io is by far the most volcanic place ever observed in nature, which is the direct result of a kind of endless stop-and-go squeezing as Ganymede and Europa swing by on outer orbits, with their gravity yanking it in an opposite direction from Jupiter's powerful gravitation.

And consider ice-capped Europa, Io's closest neighbor, which we are virtually certain contains a vast global ocean of liquid salt water. Europa is estimated to have several times as much liquid water as all the oceans of Earth combined, because not only is there no land poking up from its ice surface at all, not one continent, it's also thought to be a very deep ocean. It's a giant drop of water, orbiting of Jupiter! For me it's the single most enigmatic place in the solar system. [Photos: Europa, Mysterious Icy Moon of Jupiter]

The question is, has it developed life? Is something swimming down there, under a half mile or more of crust? And if, alternatively, it's a dead ocean, despite having all the preconditions for life, why is that? Europa presents key existential questions.

Q: Which future planetary science mission would you most like to see become reality?

A: Now there's a nice segue, because I've been advocating that NASA focus its robotic efforts on Europa for years now.

But although a mission to Europa would be roughly comparable in cost and complexity to the new Curiosity rover on Mars, or the Cassini mission to Saturn, unfortunately the assumption has taken hold that discovering whether there is life in the Europan ocean requires not only landing on its surface, but also developing the technologies that could permit the spacecraft to lower an automated submarine capable of melting through what by all accounts is an ice crust that's many miles thick. Needless to say, that's a very fraught proposition, very complex technologically, and far more expensive than Curiosity or Cassini.

But you know what? That's also totally erroneous. Europa's surface has plenty of faults that, as Galileo Orbiter images from the 1990s reveal, provide plenty of evidence that water from the ocean below has welled up, and been deposited neatly on either side of the fault before freezing. Rick Greenberg of the Lunar and Planetary Lab at the University of Arizona has pointed out that all we really need is a lander that can set down at the edge of one of those cracks, directly on top of an area that seems to be comprised of extruded and frozen sub-surface ocean water, and then collect samples from only a few meters below the surface.