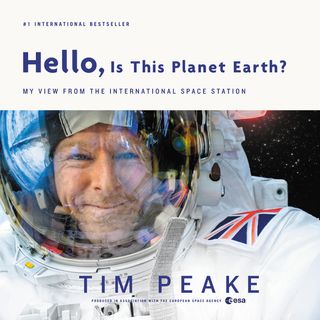 On Christmas Eve, 2015, British astronaut Tim Peake dialed the wrong number from the International Space Station as he tried to spread holiday cheer.

"Hello, Is This Planet Earth?" (Little, Brown and Co., 2017), Peake's photo book out today (June 6) in the U.S., takes its name from his greeting to the confused woman back on Earth who answered that unexpected phone call. In it, he documents his best photos taken from 186 days on the International Space Station. View a selection of photos from his new book here.

Peake's book features photos of night and day, oceans and rivers, mountains and deserts, towns and cities, and the Earth overall, as well as the satellites, cargo craft and other gear that made appearances during his time on the space station. His images are interspersed with descriptions of how he captured the photos and anecdotes about his time in space.

But the book's focus is on the stunning photography. Readers who are interested in learning more about Peake's experience will have to wait until Oct. 18 for his upcoming book, "Ask an Astronaut" (Little, Brown and Co., 2017). All of the proceeds from both books will be donated to the youth charity Prince's Trust.

Peake was the first British European Space Agency (ESA) astronaut to visit the space station, as well as the first to run the London marathon from space. Besides his mistaken phone call, he also wished Queen Elizabeth a happy 90th birthday from space.

In 2009, Peake became the first U.K. citizen chosen for astronaut training by ESA officials. He is a former British Army Apache helicopter test pilot and was the sixth British-born person to fly in space overall. He landed back on Earth in June 2016.