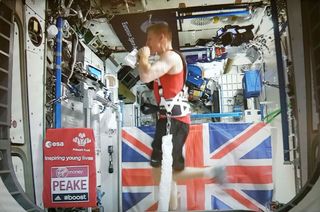 British astronaut Tim Peake of the European Space Agency (ESA) takes a drink while running the London Marathon aboard the space station on April 24, 2016.
(Image: © ESA)

Peake, who traded the traditional course around the River Thames for a treadmill on the International Space Station, crossed the finish line after three hours, 35 minutes and 21 seconds. [Most Extreme Human Spaceflight Records of All Time]

"Running the fastest marathon in space on the only day off from his grueling schedule is a fantastic accomplishment," stated Marco Frigatti, head of records for Guinness World Records. "Tim is a true inspiration and someone we can all look up to. Literally."

Wearing a harness that substituted for the pull of gravity, keeping him from floating off the treadmill's track with each step, Peake, 44, briefly kneeled and then bent over as he came to the end of the run. Flight controllers monitored his progress from the ground, at one point noting that his pace was up to 8.7 miles per hour (14 km/h).

Peake's time bested the only other astronaut's marathon in space by 49 minutes.

On April 16, 2007, Sunita Williams of NASA ran the Boston Marathon aboard the space station, completing the feat in four hours and 24 minutes. Williams ran the 26 miles using the orbiting outpost's first treadmill, since jettisoned, which differed in design and bungee restraint harness.

The treadmill Williams used, the TVIS or the Treadmill with Vibration Isolation and Stabilization System, was designed with a gyroscope to counteract the vibrations generated by running on it. The COLBERT (Combined Operational Load Bearing External Resistance Treadmill), used by Peake on Sunday replaced the spinning gyro with pins and brackets, providing a more stable running surface.

Williams retains the record for the fastest marathon in orbit by a female, according to Guinness World Records.

Williams is also the first astronaut to complete a triathlon in space, running, biking and "swimming" along with athletes in the 2012 Nautica Malibu Triathlon in southern California. In addition to the COLBERT, or T2, treadmill, Williams also used a stationary bike and the ARED, the space station's Advanced Resistive Exercise Device, to complete the 22.5 mile (36 km) multi-medium course in one hour, 48 minutes and 33 seconds. [Astronaut to Run Triathlon in Space (Video)]

Prior to Sunday's run, Peake told reporters that he did not expect to beat his best time on the Earth because of the treadmill's harness, which "gets very uncomfortable" after about 40 minutes of wear. Still, he met his goal, which was to complete the marathon in three and a half to four hours.Peake's record-setting time was 16.5 minutes slower than his prior best running in the London Marathon. In 1999, he completed the ground-based course in three hours and 18 minutes.

Before starting his own run, Peake provided a countdown for the 40,000 athletes who ran in the London Marathon on the ground. A group of runners, calling themselves "Team Astronaut," joined Peake in the marathon to raise funds for The Prince's Trust, a youth charity that helps young people get into jobs, education and training.

On the ground, the best male and female times were set by Eliud Kipchoge, 31, and Jemima Sumgong, 31, who ran the marathon in two hours, two minutes and 57 seconds and two hours, 22 minutes and 58 seconds, respectively. Kipchoge's time was only seven seconds outside the world record.

When not being used to run marathons, the treadmills on the International Space Station are used by the astronauts for their daily exercises to counteract the negative effects microgravity has on their muscle mass and bones.