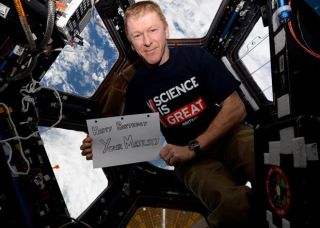 The United Kingdom is marking the 90th birthday of Queen Elizabeth II — its longest-reigning monarch — with a massive celebration today (April 21). In fact, the royal revels reach all the way into space.

"#HappyBirthdayYourMajesty," Peake wrote in the simple message, which was repeated in hand-drawn block letters on a sheet of three-ring binder paper. Peake snapped the photo in the space station's Cupola, an observation room that offers panoramic views of Earth (which was a brilliant blue with some clouds in the image). You can see more of Peake's amazing space photos here.

And Peake wasn't done yet. He also dressed for the queen's birthday, or at least as well as he could while flying 240 miles (386 kilometers) above Earth at nearly 17,400 mph (28,000 km/h). Emblazoned on his T-shirt was the patriotic phrase: "Science is Great Britain."

Peake represents the European Space Agency and is one of six crewmembers currently living on the International Space Station. In addition to Peake, the station is home to three Russian cosmonauts and two American astronauts.

This isn't the first time Peake has beamed a message to Earth for his nation's monarch.

In December, shortly after launching to the space station, Peake recorded a video of himself saying "God save the queen"  in space to honor Queen Elizabeth II. In his message, Peake said he enjoyed seeing the British Isles from space and that he hoped his flight would help inspire the United Kingdom.

The queen also sent Peake a message on Dec. 15 on behalf of herself and her husband, Prince Philip, to recognize the astronaut's achievements in space. Peake launched to the space station in mid-December and will return to Earth in June.

"We hope that Major Peake's work on the space station will serve as an inspiration to a new generation of scientists and engineers," Queen Elizabeth II said at the time.

This weekend, Peake also plans to run the London Marathon in space. He'll have to secure himself to the space station's treadmill for the zero-gravity run.