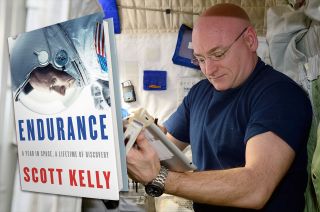 Scott Kelly shares his experiences as an astronaut in "Endurance: A Year in Space, A Lifetime of Discovery."
(Image: © NASA/Knopf (composite: collectSPACE.com))

Scott Kelly left a copy of "Endurance" on the International Space Station.

The veteran of the single longest mission by an American astronaut, Kelly recounts his 340 days on board the station in "Endurance: A Year in Space, A Lifetime Discovery," his first book, published by Knopf on Oct. 17. But it wasn't that "Endurance" that Kelly left behind.

Rather, as he describes in his memoir, it was a paperback copy of Alfred Lansing's similarly-titled book about Ernest Shackleton's Antarctic expedition that Kelly tucked away in a cargo transfer bag that serves as the station's small and often overlooked library. [Best Space Books and Sci-Fi of 2017: A Space.com Reading List]

"I brought this book with me on my previous flight as well, and sometimes I flip through it after a long day and reflect on what these explorers went through almost exactly one hundred years before," Kelly recounts. "When I read about their experiences, I think about how much harder they had it than I do. Sometimes I'll pick up the book specifically for that reason."

"[It] reminds me that even if I have it hard up here in some ways, I'm certainly not going through what they did," writes Kelly.

Now Kelly's experiences, as described in his "Endurance," can serve a similar purpose for readers. Kelly did not see the link between the two until someone suggested the title.

"At some point somebody said to me that this really was a mission of endurance, not only in space, but from the time I was a kid," Kelly said in an interview with collectSPACE. "It was an example of sticking your nose to the grindstone and just plugging away at it."

"When I heard that, I thought it was a pretty good idea for a title for the book, especially because of the connection I had with 'Endurance' and Shackleton," Kelly said.

Kelly's journey to becoming an astronaut (which he traces back to the influence of a different book, "The Right Stuff," Tom Wolfe's tale of the Mercury astronauts) is set opposite the events on his last space mission in "Endurance." Both timelines share a common theme: identifying a challenge and overcoming it.

"I had flown [for] six months previously so I kind of knew what I was getting into," said Kelly, describing his first stay on the space station from October 2010 to March 2011. "You are in this closed environment that you have very little control over and you have this challenging work schedule all the time."

Over the course of the station's 17 years of astronaut and cosmonaut crews, many of the orbiting outpost's six-month residents hit a wall about three-quarters in, where the pull to return to Earth became overbearing. Kelly experienced that on his first stay and witnessed others going through it to various degrees, but he avoided the wall on his yearlong expedition.

"I knew how to avoid getting into that trap, where you are working really hard, not resting enough and you are letting the situation get to you," Kelly said. "The other thing that I think made it a little bit easier than it might have otherwise been is that it was unique. No other American astronaut or Russian had spent that much time on the space station."

"When you're doing something unique, it motivates you to more. In some cases it makes it harder, because no one has done it before, and sometimes it's easier, because you get a sense of accomplishment from doing something hard and it is more meaningful."

Going into his last, longest mission, Kelly knew there was a possibility he would write a book after he came back. He therefore approached the flight with a plan, at least at first, to write down his observations about life in space, as well as the challenges he faced.

Kelly kept a journal of his dreams, which he shares from in "Endurance" and documented his spacewalks, the science he conducted, and his interactions with his crewmates in space and flight controllers on the ground. He also recorded how his body adapted (and didn't adapt) to microgravity and the return to gravity.

"I think I did a good job of capturing what it is like to fly in space, and hopefully the reader can feel that," he said.

Watch a trailer for Scott Kelly’s “Endurance: A Year in Space, A Lifetime of Discovery” at collectSPACE.