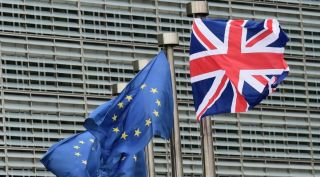 Britain's vote to quit the European Union is likely to occur over a period of two years, during which time the UK and the EU may be able to negotiate treaties to minimize Brexit's effects. But Britain's role in the EU's Galileo and Copernicus programs, and its attractiveness to non-UK companies seeking European space business, may diminish.
(Image: © European Commission)

PARIS — The British vote June 23 to leave the European Union is likely to occur gradually over two years, but it raises multiple immediate questions about the consequences for Europe's space programs and Britain's role in them.

Not all of these questions can be answered definitively. British and European Union officials have said it will take time to fix a precise schedule for the separation. During this time it may be possible for Britain and the European Commission to negotiate trade and security treaties that would blunt the impact of the withdrawal. Here are some of the issues confronting British and European space policy after the vote:

— More than three-quarters of Britain's space spending is sent to the 22-nation European Space Agency, which is not a European Union organization. ESA Director-General Johann-Dietrich Woerner has said that for ESA programs, Brexit should have little or no impact.

ESA already includes two full members — Norway and Switzerland — that are not in the EU, with Canada as an ESA associate member.

A British company, Surrey Satellite Technology Ltd. (SSTL), is prime contractor for Galileo's payload electronics. Twenty-two Galileo satellites have been ordered from OHB SE of Bremen, Germany. Most of them have been built and all were contracted well before the Brexit issue.

The question concerns future Galileo satellites. The European Commission, through ESA, is managing a competition for a fresh set of Galileo spacecraft that, in principle, will look almost identical to those built by OHB and SSTL.

ESA has set a deadline of July 19 for industry to bid on the next Galileo satellite series. OHB Chief Executive Marco R. Fuchs has said his company is bidding the same OHB-SSTL team that won the previous order, although he concedes the consequences of Brexit have been a concern.

Norway is part of the Galileo program after having signed a security treaty with the European Union. Whether such a treaty would suffice to permit a non-EU member from having a role as central as SSTL's in Galileo is unclear.

For the moment, Britain remains in the EU, but the Galileo satellites to be contracted will be delivered and launched toward the end of the decade, presumably after Brexit occurs.

— Britain has been an active participant in the Galileo system's Public Regulated Service, which is similar to the U.S. GPS network's M-code in providing protected, encrypted signals reserved for military and government customers.

Norway's security treaty was not sufficient to allow Norway access to PRS. Like the United States, whose Defense Department wants access to PRS to diversify signal sources and raise system resiliency, Norway is now awaiting an EU decision on whether it can offer PRS to its government and military.

— The European Union also owns the Copernicus environment-monitoring program, which like Galileo is funded through the European Commission's Multi-year Financial Framework.

The current seven-year financial commitment runs to 2020, with a mid-term review scheduled for late this year. With Britain now starting what apparently will be a two-year countdown on exit, what will Britain's role be in the final years of this program?

The British government and the British industrial space sector have set ambitious goals to increase Britain's share of worldwide space commerce to 10 percent by 2023, against 6.5 percent now.

Britain's space sector has been growing much faster than the overall British economy in recent years and in 2013 was estimated at 11.8 billion British pounds, or nearly $19 billion at 2013 exchange rates, with an direct employment base of more than 35,000.

To the extent that these investments were based on projections of future ESA budgets and Britain's share in them — 325 million euros ($369 million) in 2016 — these decisions remain as valid today as yesterday.

But with the European Union's role in space affairs growing, and with its two flagship infrastructure programs — Galileo and Copernicus —designed as forevermore-type commitments, the industrial calculus will be complicated.

Will the continued ESA membership and whatever UK-EU treaties are negotiated be enough to justify a non-UK company's current UK strategy? That is not clear.

Britain is best known as an economy driven by services, especially financial services. But Airbus UK is mainly a hardware builder and is the dominant corporate space presence in Britain.

If it now becomes more difficult for Airbus to justify funneling European Union work to the company's Stevenage or Portsmouth plants, how much of that work over time will be shifted to Germany or France or Spain?

Questions from a satellite fleet operator

Satellite fleet operators are also raising issues. Paris-based Eutelsat, for example, has made Britain the home of Eutelsat's Quantum flexible-payload satellite program, which is funded from ESA mainly by British money.

Eutelsat's Broadband for Africa project, with Facebook as a partner, is also headquartered in Britain, as is Eutelsat's Global Government division.

Matt Child, Eutelsat's vice president for government services, said in April that the company already had begun thinking about Brexit issues. Among the questions:

The ease of establishing companies and relocating employees?

Attractiveness to international companies who currently see the UK as the gateway to Europe?

Child did not pretend to know the answers.