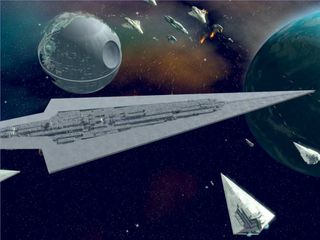 It's theyear of StarWars for science fiction fans, and gamers already have a head start.

The Jedibrainchild of filmmaker GeorgeLucas celebrates its 30th anniversary since the 1977film release of Star Wars [image]in 2007. But for gamers, the festivities began late last year with the releaseof several LucasArts titles for hardcore fans.

LucasArtsramped up to 2007 with Forces of Corruption, an expansion pack toits Empire at War title that adds a third option for gamer unsatisfiedwith merely guiding the mighty Empire or Rebel Alliance on to victory. Instead,players portray Tyber Zann in his attempt to rule the StarWars underworld with his criminal Zann Consortium [image].

Forcesof Corruptionjoined a pair of other LucasArts releases - the Star Wars: Best of PCfive-pack and Star Wars Galaxies: The Complete Online Adventures - towhet gamer appetites for 2007.

In astatement released last week, one day after storm troopers from aroundthe world marched in the annual Jan. 1 Rose Parade in Pasadena [image],California, Star Wars officials pledged that 2007 will feature "entirely newvideogame adventures that continue the saga in new and unexpected ways..."

"We'rereally planning the next 30 years of Star Wars," said Tom Warner, seniordirector of marketing for Lucasfilm Ltd, in the statement. "Star Wars isone of the most popular and enduring entertainment franchises in the world, andthere's no better time than the 30th anniversary to look ahead to the future ofthat galaxy far, far away."

Computergames aside, a host of Star Wars books, merchandise and events areplanned throughout this year, culminating in Lucasfilm's four-day CelebrationIV Memorial Day extravaganza at the Los Angeles Convention Center.

Lucas isalso reportedly pursuing a three-dimensional animated television Clone Warsseries to continue the saga of the samename that ran between 2003 and 2005, though the show has not yet been soldto a network, according to the Associated Press.

"The lastthree decades were just the start," Warner said.

TheAssociated Press contributed to this report.