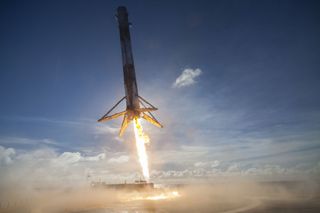 The first stage of a SpaceX Falcon 9 rocket comes in for a successful landing on the drone ship "Of Course I Still Love You" after launching the Thaicom 8 satellite into orbit on May 27, 2016. SpaceX hopes to refly a used Falcon 9 booster in September or October of this year.
(Image: © SpaceX)

The private spaceflight company SpaceX plans to relaunch one of its Falcon 9 boosters into orbit this fall — a test flight that will mark the next giant leap in the firm's pursuit of reusable rocket technology.

SpaceX has four successful rocket landings under its belt, including three back-to-back touchdowns at sea this spring, the most recent of which launched and landed on May 27. That latest Falcon 9 booster returned to Cape Canaveral, Florida (its launch site) on June 2 atop SpaceX's drone ship landing pad "Of Course I Still Love You." It was ultimately moved to a SpaceX hangar at Pad 39A of NASA's Kennedy Space Center earlier this week.

"Fourth rocket arrives in the hangar," SpaceX CEO Elon Musk wrote in a Twitter post on Tuesday (June 7) as the latest booster was safely stored away. "Aiming for first reflight in Sept./Oct." (You can check out more photos of SpaceX's latest rocket landing here.)

Successfully launching and landing a Falcon 9 rocket that has already flown in space is a major goal for SpaceX's reusable rocket program. The first stage of SpaceX's Falcon 9 rocket is equipped with landing legs, control vanes and other technology that allow the boosters to return to Earth and land on a ground-based pad (which occurred in December 2015) or on a drone ship in the ocean (as in the three other successful landings).

SpaceX wants to develop a reusable launch system to make spaceflight more affordable. Each Falcon 9 rocket costs about $16 million to build, but the cost of the propellant for each flight is just $200,000, Musk has said. Therefore, rocket reuse represents a potentially huge cost reduction.

Musk has long stated that his long-range goal for SpaceX is to make a Mars colony a reality. But to do that, the cost of spaceflight needs to be lower.

SpaceX is also developing a larger rocket — the three-booster Falcon Heavy, which is also designed to include fly-back boosters.