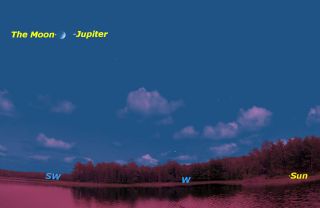 Soon after the sun sets and the sky becomes sufficiently dark to see the brighter stars, our attention is drawn to not one, but three bright planets. High in the southern part of the sky we can see silvery-white Jupiter, while low in the south-southeast glows amber colored Mars, while cream-colored Saturn is coming up over the southeast horizon.

If you're up at dawn and in a sporting mood you might try to glimpse speedy Mercury, though its viewing circumstances do not particularly favor Northern Hemisphere skywatchers. As for the most brilliant planet of all, Venus is out of the loop all month long as it transitions from a morning to evening object; it's simply too near to the sun to see.

In our schedule, remember that when measuring the angular separation between two celestial objects, your clenched fist held at arm's length measures roughly 10 degrees. Here, we provide some of the best planet-viewing times as well directing you as to where to look to see them. [Skywatching In 2016: The Year's Must-See Events (Calendar)]

All month: Mars, having made its closest approach to Earth on May 30, now begins to recede and consequently will appear from here on to gradually fade and shrink in apparent size. On June 1, this fiery colored object shined at magnitude -2.0, only a trifle fainter than Jupiter according to Observer's Handbook of the Royal Astronomical Society (some other sources list Mars and Jupiter as shining at the same magnitude).

At the start of June, Mars was about 47.3 million miles (76.1 million km) from Earth. By month's end, however, its distance from Earth will have increased to 53 million miles (85.2 million km) and it will have faded to magnitude -1.4; still dazzling, but only about one-half as bright as it was at the beginning of the month. In small telescopes Mars will also appear nearly 12 percent smaller than it did on June 1.

Mars remains within the boundaries of the zodiacal constellation of Libra (the Scales) all of this month. It appears as a bright and imposing yellow-orange light low in the east-southeast sky at dusk and remains in the sky for much of the night. Even by June 30, it does not set until around 2:30 a.m. your local time.

June 3 – Saturn ascends the southeastern sky during early evening and moves westward through the night as the Earth turns. On June 3, it becomes the third planet of the year to reach opposition, that is, to be opposite the sun in our sky. For the rest of the summer Saturn will remain in the evening sky, fading slightly as Earth pulls ahead of it in its orbit. Saturn is shining at magnitude 0.0, unusually bright for this faintest of the five classical naked-eye planets. The reason is that its rings are tilted toward Earth by 26 degrees, presenting a larger-than-normal profile. The rings will be tilted to their maximum extent, 27 degrees, in October 2017.

June 5 – This morning, Mercury reaches greatest elongation 24 degrees west of the sun. This is the poorest of three morning apparitions of Mercury in 2016 for observers at mid-northern latitudes. For example, at 40 degrees north latitude, Mercury is only 2 degrees above the east-northeast horizon at mid-twilight. Although closer to the sun, the planet will be brighter and slightly higher a week later. Only persons at more southerly latitudes are likely to view the planet without optical aid.

June 6 – Venus in superior conjunction, on the far side of the sun today. So this normally prominent planet is lost in the solar glare all month. In fact, from approximately 7 p.m. EDT on June 5, to 5 p.m. EDT on June 7, Venus will be directly behind the sun as seen from here on the Earth. ['Finest' Double Stars, Bright Cluster and Planets In June 2016 Skywatching (Video)]

June 11 – Jupiter is prominent in the west-southwest during June's long evening twilights. It is well to the upper left of Regulus and draws noticeably away from the star this month. Jupiter was at eastern quadrature (90 degrees east of the sun) on June 4, so June is a good time to enjoy the eclipses and other events of its big Galilean moons. Jupiter's globe is high enough for sharp telescopic viewing as soon as the sky darkens. The planet doesn't set until the middle of the night. This evening, Jupiter will be positioned about 4 degrees to the right and slight above the moon.

June 18 – As darkness falls this evening, look to the south-southeast part of the sky for the moon, less than 36 hours from full phase and 98-percent illuminated, sitting about 2.5 degrees to the upper left of a very bright star shining sedately with a yellowish-white hue. That "star" is, in reality, the planet Saturn. If you extend an imaginary line from the moon through Saturn and continue on at roughly twice the distance between the two, you'll come to the 1st-magnitude red star Antares in the constellation of Scorpius, the Scorpion.