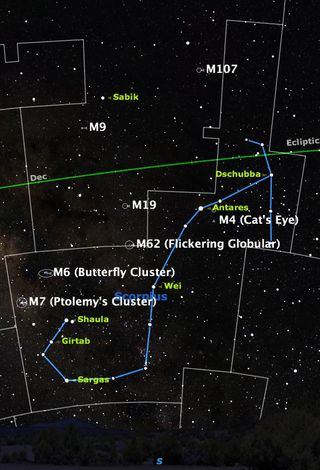 Look southward after twilight ends to see Scorpius, one of the few constellations that actually resemble their names.
(Image: © Starry Night software)

Scorpius is one of the prettiest constellations in the sky, and one of the few that actually resemble their names.

Most of the myths about Scorpius associate it with Orion, which is almost directly opposite it in the sky. The bright-red, giant star Antares marks the heart of the scorpion. Its name means "anti-Mars" because its deep-red color resembles that of the Red Planet. In 2001, Mars came to opposition close to Antares, and the two deep-red objects made a spectacular sight. Mars will again approach Antares closely about two years from now, on Aug. 24, 2016, passing less than 2 degrees to its north.

Antares is an interesting double star. The bright-red giant has a tiny companion almost lost in its glare, even in large amateur telescopes. This companion often looks greenish, a color rarely seen in stars, because of red Antares' hue. [The Best Stargazing Events of 2014]

To the west of Antares (to its right in the Northern Hemisphere) is an arc of three bright stars marking the Scorpion's claws. The northernmost of these stars, Graffias, is one of the finest double stars in the night sky — its two bluish components easily split at 100x in a 4-inch telescope. Just to its east is Nu, a "double-double" in an 8-inch telescope under steady seeing conditions.

To the east and below Antares, the long tail of the Scorpion curves downward, ending in the bright twin stars Shaula and Lesath, sometimes called "the Cat's Eyes" or "the Stinger." Shaula is Arabic for "the raised tail," and Lesath is Arabic for "animal bite." Although close together in the sky, these do not form a true double star, since they are respectively 709 and 522 light-years away from the sun. They are easily seen as two separate stars with the naked eye, looking like a cat's eyes peering over the southern horizon.

Not all of the Scorpion's tail is visible if you live in the northern part of North America or you have obstructions on your southern horizon.

However, Scorpius contains some of the finest deep-sky objects in the sky. Close to the Scorpion's stinger are two of the brightest open star clusters, numbers 6 and 7 in Messier's catalog.

Messier 7, located 800 light-years from the sun, is sometimes called "Ptolemy's Cluster" because it was catalogued by Claudius Ptolemy in the 2nd century A.D. Messier 6, known as the "Butterfly Cluster" is almost twice as far away. Both these clusters are beautiful sights in binoculars.

Scorpius also contains two of the finest globular clusters. Messier 4, halfway between Antares and Al Niyat to its right, is one of the solar system's nearest globulars, at 14,000 light-years distance. Messier 80 is 33,000 light-years away, and is located close to the "u" in Dschubba in the chart.

Notice how the ecliptic — the path of the sun and planets across the sky — passes through only a very narrow portion of Scorpius, compared to a much broader patch of Ophiuchus. While observing Scorpius, be sure to also check out the numerous fine globular clusters in Ophiuchus.