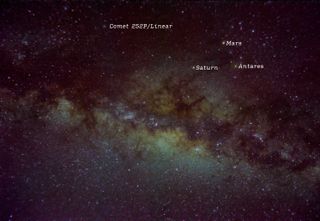 A red planet, a ringed planet and a bright yellow star meet in the night while a comet whizzes by in a gorgeous skywatching image.

"I chose Sámara due to its location (9 degrees above the equator) and sweeping views of the Southern Hemisphere," he wrote in an email to Space.com." My habit then became one of getting to bed early so that getting out to the beach by 3AM was the norm rather than the exception."

In the image, one can see Mars, Saturn, the bright star Antares and Comet 252P/Linear. Comet LINEAR was discovered on April 7, 2000, by researchers from the Lincoln Near Earth Asteroid Research program, an MIT Lincoln Laboratory program funded by NASA and the U.S. Air Force. The comet's core is estimated to be 750 feet (230 meters) across.

The image was shot with a mirrorless Sony A6000 and the Sony 18-55mm kit lens. Harper used the Triggertrap app and dongle on his iPhone to shoot 32 - 12 second exposures. They were aligned and stacked using the Hugin app on OS X, then processed in Photoshop.