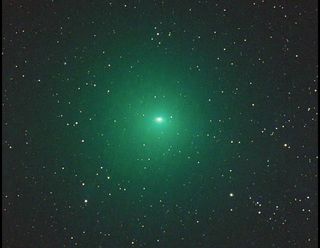 "Comet 252P/LINEAR glows a vivid green from fluorescing gas in this composite photo taken from Namibia on March 18, 2016, with a specialized telescope 12 inches in aperture," according to Sky & Telescope magazine.
(Image: © Gerald Rhemann/www.astrostudio.at; Sky & Telescope: http://www.skyandtelescope.com/)

Comet LINEAR (formally designated 252P) is coming into view for observers in the Northern Hemisphere during the last few days of March. The comet's arrival has skywatchers excited because this icy space rock is 100 times brighter than expected.

"Don't expect Comet LINEAR to be obvious, with a long tail," Sky & Telescope senior editor Kelly Beatty said in a statement. "Its light isn't concentrated in a single point, but instead is spread out in a soft, round glow, larger than the moon but many thousands of times dimmer." [Skywatching in 2016: The Year's Must-See Events (Calendar)]

Skywatchers observing the comet with telescopes may see the greenish haze surrounding it. This green glow is thought to be created by atoms of diatomic carbon surrounding the comet and fluorescing in the sunlight, the statement said.

Observers should go outside at least 90 minutes before sunrise in a dark area and look for the comet between the constellations Sagittarius and Scorpius.

The planets and stars can also serve as guideposts for finding the comet. LINEAR will be in line with Mars and Saturn on March 29, and in line with Saturn and Antares (a bright, red star in the constellation Scorpius) on March 31. The moon will also be close by, particularly on March 30; it will be just 3 degrees to the lower right of the comet.

LINEAR passed its closest point to Earth on March 21, at a distance of about 3.3 million miles (5.3 million kilometers). Given that it's now moving farther out into the solar system and away from the sun, astronomers aren't sure how long it will stay this bright.

Observers with very large telescopes also may be able to spot another comet passing near Earth: Comet Pan-STARRS (designated P/2016 BA14). It came within 2.2 million miles (3.5 million kilometers) of Earth on March 22.

"The timing of these paired visits is probably no coincidence," said the same statement from Sky & Telescope. "The 'P' in both comets' designations means they are in periodic (elliptical) orbits that bring them near the sun repeatedly — in this case, about every five years. Their orbits are so similar that comet specialists suspect these two bodies are fragments of a single object."

Comet LINEAR was discovered on April 7, 2000, by researchers from the Lincoln Near Earth Asteroid Research program (an MIT Lincoln Laboratory program funded by NASA and the U.S. Air Force). The comet's core is estimated to be 750 feet (230 meters) across, according to the statement. Comet Pan-STARRS was discovered by researchers from the Panoramic Survey Telescope & Rapid Response System (University of Hawaii) more recently, on Jan. 22, 2016. Its core is estimated to be 350 feet (100 m) across, according to Sky and Telescope.

Editor's Note: If you snap an amazing picture of Comet LINEAR, you can send photos, comments and your name and location to managing editor Tariq Malik at spacephotos@space.com.