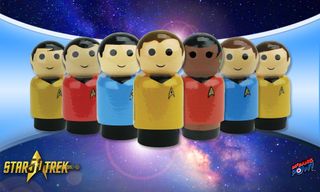 "Star Trek" turns 50 this year, which means fans can count on lots of new merchandise hitting the shelves.

There is already a trove of "Star Trek" merchandise available to the franchise's army of dedicated fans, from ship replicas that cost upward of $10,000, to $15 dog toys and everything in between.

Here are a few of the new items that will become available this year, including the just-announced Pin Mate figures from Bif Bang Pow!, new character figures, a flying drone that looks like the USS Enterprise, and cat toys. [The Evolution of 'Star Trek' (Infographic)]

Just this morning, Bif Bang Pow! announced the release of seven Star Trek Original Series Pin Mate figures. These 2-inch wood figures are good as desk decorations or as toys for young kids. Their spherical heads and cylindrical bodies will be extremely satisfying to geometry fans. According to the website, each figure is "individually numbered and features 360-degree artwork that is hand-painted and includes some decal elements."

We first saw the Pin Mate toys at the New York Toy Fair — a trade show for toy manufacturers to connect with retailers and the press. Bif Bang Pow! already has a bunch of Trek merchandise, mostly bobbleheads, plus some "fine art" items that feature unique Trek-inspired art.

We already told you about this USS Enterprise flying drone from Spin Master's Air Hogs line, and we're telling you about it again, because it's pretty awesome. The drone's four rotors are hidden inside the ship's saucer, and it makes 10 authentic sound effects.

Quantum Mechanix already has a huge offering of Trek merchandise. Their inventory ranges from very realistic, large-scale ship models that can cost many thousands of dollars, all the way down to key chain versions that run for less than $20. They've got original artwork, adorable figures and so much more.

This year expect to see Quantum Mechanics offer some gorgeous new models of the USS Enterprise, like these beauties made by Metal Works and Mini Masters.

Figures from One:12 Collective

Trek figures from the Mezcotoyz One:12 Collective line include Spock, Kirk and Sulu. The figures will arrive in May 2016, but are available for preorder now. Mezcotoyz makes all kinds of dolls, plushes and minifigures from comic books, cartoons and movies, but these figures appear to be their first Trek-related items.

Trek gear from The Coop

The Coop is one of our favorite Star Trek merchandise and apparel manufacturers, because they seem to have a lot of fun with the products they create. I mean, who wouldn't love a coin purse that looks like a tribble! Or a bag that looks like the hand-held communicators from the original series, but which actually holds doggie poop pickup bags!

The Coop his year will also release new Trek-related cat toys and some bags inspired by "Star Trek: The Next Generation," including a Borg backpack (now available) and Klingon messenger bag (out later this year). Check out the company website to find those items, as well as merchandise from other shows and franchises.

Mattel has launched a new line of toys called Kubros, which are characters built out of MegaBloks. The figures are about 3-4 inches tall, so they're very different from Lego minifigures. So far, the Kubro family includes characters from "Masters of the Universe," "The Terminator," "Minions" and "Star Trek" characters Spock and Captain Picard.

On a side note, there is a very awesome Kubro figure of Ellen Ripley (Sigourney Weaver's character in the "Alien" franchise), inside the work-loader suit she wears to fight the queen in "Aliens."