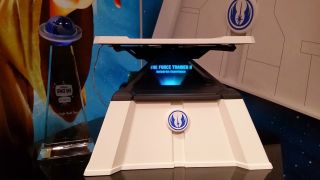 Uncle Milton's Force Trainer II uses holograms and a device that reads brain waves to train users how to use the "force" as presented in the "Star Wars" universe.
(Image: © Space.com/Calla Cofield)

Space-age gadgets for kids and adults alike were on display this weekend here at the Jacob K. Javits center in Manhattan. Space.com scoured the aisles of the 112th Toy Fair this weekend to find the best cosmic toys for the 4th annual Space Age Awards.

Awards are given for the best toys in eight different categories, which are: Best High-Tech Toy, Sci-Fi on Earth, Amazing Robots, Cosmic Space, Flying Drones, Little Scientists, Retro Future and Do-it-Yourself Science. Space.com's Tariq Malik, Calla Cofield and Miriam Kramer picked the winners and finalists based on their favorite new toys on display at this year's huge toy expo. Learn more about the winners and finalists below. [See photos of 2015's Space Age Award Winners]

Finalists: VTech's ActionCam, a camera with Instagram-like features for kids built in; Crayola's Easy Animation Studio, designed to let kids create their own animated shorts and bring pictures to life on a tablet or a smartphone; and WowWee's R.E.V robotic cars.

Winner: The Coop's Tricorder Replica Small Messenger Bag, available now, $39.99. This awesome bag brings "Star Trek" to the real world. Modeled after the TV show's tricorder bag, this sci-fi-inspired piece is functional and geeky. The flaps of the bag reveal the iconic tricorder look, but once buckled back together, the bag could blend in with the crowd. What we love about it: This bag lets your "Star Trek" fan flag fly without being too overt, making for the perfect mix of science fiction and practicality.

Winner: Spin Master's Meccanoid G15 KS and G15 robots, available fall 2015, $399.99 and $179.99. The 4-foot-tall Meccanoid G15 KS and the 2-foot-tall G15 robot were the talk of Toy Fair 2015. Kids ages 10 and up can build the robot themselves and then program it to do a number of different actions. The technology for the robots is open-source, and you can use a free app to program the robots. What we love about it: These two robots can teach kids to code in a fun way. Spin Master's representatives said the robot itself is pretty easy to put together, taking about 3.5 hours to get it up and running.

Winner: Uncle Milton's Super Moon In My Room, available fall 2015, $54.99. This new version of the Moon in My Room is 30 percent larger than the original — an appropriate number because actual supermoons are about 30 percent brighter than the average full moon. Super Moon in My Room has an eclipse setting that looks strikingly like a solar eclipse and kids can synch up the toy's moon phases with the actual natural satellite in the sky. What we love about it: Super Moon in My Room has a great educational component to it. Kids can learn more about the phases of the moon and different features of the lunar surface, thanks to a program that comes with the toy.

Winner: Sky Rocket's Sky Viper video drone, available August 2015, $89. The Sky Viper Video Drone looks like a great drone that is relatively stable for people just learning how to fly one of these machines. And at about $90, it won't break the bank. The drone's HD camera can be used for still photos, and an upgraded version of the toy, exclusive to Toys R Us, will have streaming capabilities. What we love about it: This drone is accessible, and also comes at a price that even a new drone flyer would love. It has many of the coolest features of a high-end drone without the barrier to entry.

Finalists: Bladez's Micro Pod Squad drone, which is small enough to fit inside its own controller; Odyssey Toys' Nebula Cruiser, made of durable foam with red-and-green lights; Spin Master's Air Hogs Shadow Launcher, a remote-control car with a small drone copter that launches out from within it; and Auldey Toys' voice-controlled Sky Rover. [Read about 2014's Space Age Award Winners]

Winner: Arklu's Stargazer Lottie doll, available March, $24.99. Stargazer Lottie is one of many Lottie dolls created by Arklu. This particular doll was created with help from the European Space Agency and a young girl that helped design the doll. The toy comes with her own telescope and a piece of paper outlining a series of famous female astronomers. What we love about it: This doll was one of our favorite things at Toy Fair, hands down. The creator's mission to get young girls interested in astronomy is laudable, and the doll itself is perfect for a young child first exploring the cosmos.

Winner: ThinkGeek's "Star Trek" Phaser Remote Replica, available now, $149.99 This super-fun remote is actually modeled after one of the last known prop phasers from "Star Trek." Just like the original phaser, the remote comes complete with a light-up dilithium crystal. You can program the phaser to any IR remote, and it actually senses your motions, meaning that you can program it in fun ways. For example, you can turn the volume on your TV up by moving the remote up above your head. What we love about it: This toy takes itself seriously. The phaser makes real "Star Trek" sounds and, simply put, it makes something as mundane as changing the channel on your TV fun. Plus, it's the perfect gift for any "Star Trek" super-fan in your life.

Winner: Thames & Kosmos' Remote Control Machines: Space Explorers, available June 2015, $99.95. This build-it-yourself robot is perfect for kids just getting into robotics and space. The box will come complete with an explanation of robotic Mars exploration throughout the ages and instructions for how to build a robot modeled after Mars rovers of the past. What we love about it: This fun robot will help kids learn more about space while also creating a robot with their own hands. It's educational, fun and definitely a good DIY project, even if the price is somewhat  steeper than other DIY science kits.