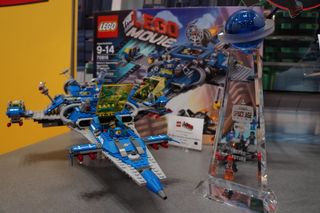 Benny's spaceship from the LEGO movie has a long history. The blue spaceman was an early LEGO space figure, and the callback to the early history of the toys pleased both adults and kids watching the film.
(Image: © Miriam Kramer/SPACE.com)

NEW YORK — From a build-it-yourself UFO to a robot that can balance a can of soda, 2014's Toy Fair showcased a diverse range of playthings and gadgets for kids of all ages.

Each year, Space.com honors the best science- and space-themed gizmos at the four-day-long Toy Fair with the Space Age Awards. This year, the decisions were difficult, but finalists and winners were chosen in seven different categories: High-Tech Toy, Amazing Robot, Cosmic Space Toy, Sci-Fi on Earth, Little Scientists, Retro Future and Do-It-Yourself Science.

Ozobot is a tiny robot that packs a big gaming punch. The little bot can play games on a tablet and other surfaces by following lines and responding to cues along its path through the electronic or paper game board. Kids and adults can draw paths on paper or a tablet that Ozobot can follow, and users can play competitive and cooperative games with the small robot. Space.com's staff was particularly taken with Ozobot's inventive way of bringing electronic games into a social setting. Ozobot is set for release this year, selling at $59.99.

Also nominated in this category were VTech's Kidizoom Smartwatch for Kids, a photo and video camera for children; and Odyssey Toys' Hubsan Spy Plane, a small quadcopter with HD video camera and glasses for remote viewing.

MiP has a huge personality. The robot, which specializes in balancing, is talkative and engaging. Users can control MiP via a smart device, or fans of the gadget can let it roam free, balancing and roving around a surface on its own. MiP can simultaneously balance a can of soda and even other robots on an attachable tabletop while moving. The two-wheeled bot also responds to commands that a user can program into it. MiP will be available in spring 2014 and can be pre-ordered now for $119.

The dancing and talking robot Disco Robo from Tosy Robotics and MOSS, a build-it-yourself robot kit from Modular Robotics, were also contenders in this category.

Crayola's Shadow Fx Color Projector blew Space.com away. The projector uses three multicolored lights to let kids play with animation and drawing. Children can draw in erasable marker on a transparent board, and when the light shines through, it projects the kids' creations on a surface. The size of the projection can also be adjusted depending on where the toy is used. The product's makers at Crayola have also included cutouts of cosmic figures like an astronaut, alien and celestial bodies that kids can use to interact with their own artwork. The projector is set for release in August and will sell for $24.99.

Finalists included UFO Northern Lights nightlight from Cloud-B, which projects a northern lights-like glow on a ceiling to aid in sleep; and Eitech's Space Shuttle, a new way to build a model of NASA's shuttle.

The National Geographic sets from Laser Pegs show a few famous historical items in a new light. Kids can now build their own spaceships, dinosaurs and pyramids using the specialized light-up pegs. The prices for each kit range from $24.99 to $79.99, and they will be in stores starting in August this year.

Finalists also included Oregon Scientific's SmartGlobe Star — an interactive constellation globe for kids to learn about the stars — and Uncle Milton's Star Wars Mini-Kits that can help kids learn the properties of snow, lava and slime.

This line of DIY kits has something for every budding scientist. Kids can make their own solar system model, learn how to build a Martian volcano and even develop their own plasma reactor. The line of science toys also includes a "musical UFO" kit that teaches little scientists how to create a theremin inside a plastic flying saucer. Each kit will be available in July and will sell for $19.95.

GoldieBlox and the Dunk Tank, which teaches girls engineering concepts, and the Super Solar Recycler from Owi Inc. were also finalists this year.

Benny's spaceship from the LEGO movie has a long history. The blue spaceman was an early LEGO space figure, and the callback to the early history of the toys pleased both adults and kids watching the film. This spaceship is based on a real-life 1980s LEGO spaceship model built by Chris Miller, director of the hit film. The huge spaceship set will retail for $99 and is set for release in August.

The other finalists included Hasbro's Star Wars Command Sets, the company's take on the green army men of yore; a tech-savvy Mr. Potato Head-like robot named Noomi from WowWee; and the Six Million Dollar Man in a spacesuit from Bif Bang Pow!

This crazy-looking hoodie is one of the more unusual science fiction-inspired pieces of clothing the staff at Space.com have seen in years. The LED, light-up jacket comes with its own speaker, and wearers can cast "spells" by moving their arms in specific, pre-programed ways. The jacket tracks the position of the wearer's arms using sensors in the wrist. The Technomancer hoodie sells for $119.99 and is available now.

An amazing Quantum Mechanix Inc. replica of the Serenity ship from the show "Firefly" and a new set of "Big Bang Theory" action figures from Bif Bang Pow! were also up for the award.