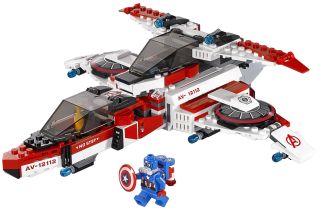 Whether you love building model observatories or helping the Avengers save the universe, there's a Lego set that caters to your needs.

Recently, the brick-building giant released three new skywatching and space sets, which include a bunch of awesome features.

You can find the first, an observatory, in Lego's "Lakeside Lodge" ($29.99), a 3-in-1 set. The lodge version includes a campfire, balcony, stove, table, moose, frog and minifigure. It can be rebuilt into an observatory or a small cabin.

Fans of the Lego "Friends" line of products have a new addition as well: "Olivia's Exploration Car" ($14.99). Olivia and her robot, Zobo, plan to take their SUV to an observatory platform that is complete with a turning platform, telescope and sky map. The sky map even includes a magnifying glass for Olivia to get a better look at constellations when aiming the telescope.

Or if superheroes are more your style, you can ride along on the Avengers' "Avenjet Space Mission" ($59.99). An Avenjet is a vertical takeoff and landing shuttle that Iron Man created for the superhero team's field missions, according to the Marvel Avengers Wiki.

The mission includes three Avengers (Captain Marvel, Captain America and Iron Man) pitted against Thanos and Hyperion. Comics Alliance points out that Hyperion is usually a good guy,"but there are a few versions of that guy floating around the multiverse, so you can never be too sure. I guess?"

The products are available from the Lego website as well as stores where Lego is usually sold.