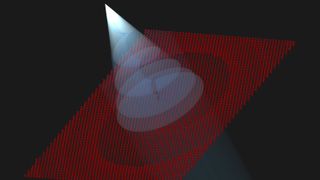 "These flat lenses will help us to make more-compact and robust imaging assemblies," Mahmood Bagheri, a microdevices engineer at NASA's Jet Propulsion Laboratory (JPL) in Pasadena, California, said in a statement.

The new tech could be a boon for space science, as small size and toughness are important characteristics for spacecraft components. [8 Baffling Astronomy Mysteries]

Typical lenses, such as those used in eyeglasses or magnifying glasses, rely on curvature to bend and focus light. As light enters a curved lens, it bends based on the density of the material and comes to a focus point.

The new flat lenses can manipulate light in ways that are nearly impossible for conventional lenses, and they take up less space, allowing for smaller electronics. (Each lens is less than 1 percent of the thickness of a human hair, researchers said.)

Devices made with the new lenses should also be tougher, since the new technology uses silicon nanopillars instead of glass.

The silicon nanopillars — so-called because they'd look like tall columns to anything smaller than a nanometer (one one-billionth of a meter) — are arranged in a honeycomb pattern. This creates "metasurfaces" that can control the paths and properties of passing light waves via electromagnetic features.

For example, these metasurfaces can change the degree to which light bends, which affects whether an image appears in or out of focus. The surfaces can also manipulate polarization, restricting the vibration of light waves to only one direction, which is essential for the operation of advanced microscopes, cameras and displays, researchers said.

Doing all of this shouldn't break the bank, either, researchers added.

"Currently, optical systems are made one component at a time, and the components are often manually assembled," Andrei Faraon, an assistant professor of applied physics and materials science at the California Institute of Technology (Caltech) in Pasadena, said in the same statement. "But this new technology is very similar to the one used to print semiconductor chips onto silicon wafers, so you could conceivably manufacture millions of systems, such as microscopes or cameras, at a time."

Other than microscopes and cameras, these ultrathin, flat lenses can also be used in advanced displays and sensors. The team, which is composed of researchers at JPL and Caltech, is now working to create metasurfaces that can be used in commercial products, like miniature cameras and spectrometers.

The new research was published in May in the journal Nature Nanotechnology.