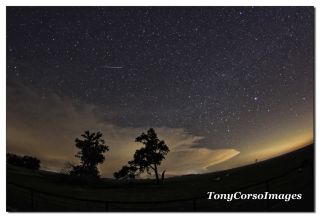 The sky will be dark and moonless for at least three hours before the first light of dawn on Thursday morning (April 23), when the annual Lyrid meteor shower is due to reach its peak.

Even if the weather in your area doesn't cooperate, you can still get a look at these shooting stars tonight (April 22). The online Slooh community observatory will air a free Lyrids webcast at 8 p.m. EDT (0000 GMT on April 23) at its website: www.slooh.com. The webacst will include live views - and sounds - of the meteor shower along with expert commentary by Slooh astronomer Bob Berman and colleagues.

You can also watch the Lyrid meteor shower webcast on Space.com, courtesy of Slooh. The meteors are called "Lyrids" because their paths, if extended backward, appear to diverge from a spot in the sky not too far to the southwest of the brilliant bluish-white star Vega, in the constellation of Lyra the Lyre. Within a day on either side of the shower's maximum, about 5 to 10 Lyrids can usually be seen each hour by a single observer under good skies. At its peak, the Lyrid rate is roughly 10 to 20 per hour. [Photos of the Lyrid meteor shower]

Vega appears to rise from the northeast around 9 p.m. local daylight time, but by 4 a.m. it has climbed to a point in the sky nearly overhead. You might want to lie down on a lounge chair so you can be comfortable while you get a good view of the sky. Bundle up, too, for nights in April can be quite chilly.

While hardly a rich display, like the famous August Perseids or December Geminids, the April Lyrids are brilliant and move fairly fast, appearing to streak through our atmosphere at 108,000 mph (174,000 km/h).  About 20 to 25 percent of the Lyrid meteors leave persistent trails.

The meteors' path strongly resembles that of Comet Thatcher, which last appeared in 1861 and has an orbital period of about 400 years. Thus, the Lyrid meteor shower is this comet's legacy: it represents the tiny bits and pieces shed by this comet on previous visits to the inner solar system. Earth’s orbit nearly coincides with Comet Thatcher around April 22 each year. When we pass that part of our orbit, we ram through the dusty debris left behind by the comet.

In 1922, an unexpected Lyrid rate of 96 per hour was recorded, and in 1982 rates reached 80 per hour. So, although the Lyrids are usually a relatively weak display, they have the ability to surprise observers.