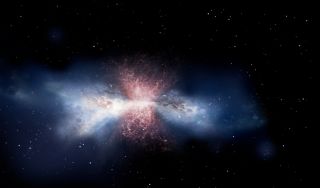 This artist's illustration of the galaxy IRAS F11119+3257 shows a wide view of how winds drive a massive outflow of gas (shown in red) from the galaxy.
(Image: © ESA/ATG medialab)

In a case of mistaken identity, a group of scientists say the first nova ever identified in the night sky is actually the result of two colliding stars, not a single exploding star [Read the Full Story]

Click through this gallery to see more amazing space photos from the week.

Intense winds from black holes can blast gas straight out of galaxies and may give black holes a role in star formation. [Read the Full Story]

NASA's Opportunity rover has completed the first-ever Mars marathon, clocking in with a winning time of 11 years and two months. [Read the Full Story]

For Asteroid-Capture Mission, NASA Picks 'Option B' for Boulder

Just about two hours into the flight of Gemini 3, NASA's first two-man space mission 50 years ago Monday (March 23), pilot John Young reached into his spacesuit's pocket and pulled out a surprise: the world’s first corned beef sandwich in space. [Read the Full Story]

SpaceX has offered up a tantalizing glimpse of its first rocket-landing site on dry land, as well as several looks at its next Dragon cargo spacecraft. [Read the Full Story]

The big asteroid 2008 EV5 may end up giving a piece of itself in the name of science and exploration. [Read the Full Story]

New images from ESO show that G2 is still intact. Does that mean it’s definitely a gas cloud and not a star? [Read the Full Story]

A mysterious cloud that glowed in the night sky above the Atlantic Ocean on the night of March 12 was actually a spray of unused rocket fuel, released following a launch from Cape Canaveral Air Force Station, Florida. [Read the Full Story]