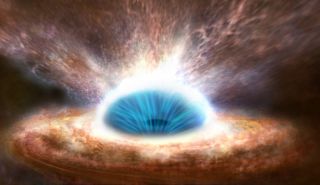 Winds from a giant black hole at the center of the galaxy IRAS F11119+3257 are shown blowing out raw material from the galaxy's core in this artist's illustration. A new study of the galaxy suggests these black hole winds can stunt star formation.
(Image: © ESA/ATG medialab)

This finding reveals how black holes can direct the fates of entire galaxies, scientists added.

The hearts of most and possibly all galaxies harbor supermassive black holes millions to billions of times the mass of the sun. Many are relatively quiet, like the one sitting at the center of the Milky Way. However, others, known as active galactic nuclei, voraciously devour their surroundings, potentially creating black hole winds. [The Strangest Black Holes in the Universe]

"As they do that, the material is also crushed and squeezed in a sort of vortex that astrophysicists call an accretion disk," said lead study author Francesco Tombesi, an astrophysicist at NASA Goddard Space Flight Center in Greenbelt, Maryland, and at the University of Maryland, College Park. "Friction in the disk causes the material to heat up to very high temperatures and to be very luminous, up to more than a trillion times the luminosity of the sun. The pressure from this radiation can then be so high that it can effectively push material away in a wind."

Prior research suggested there was a close link between the size of active galactic nuclei and the size of the galaxies they dwell in. Scientists had suspected that these active galactic nuclei could drive giant winds of gas and dust through their galaxies that could blow away massive amounts of raw star-building material, quench star formation and influence the evolution of the black holes' galaxies. [No Escape: How Black Holes Work (Infographic)]

Now researchers have the first observational evidence confirming that a supermassive black hole can power these huge outflows.

The scientists investigated the supermassive black hole at the center of a galaxy known as IRAS F11119+3257, which is about 2.6 billion light-years away from Earth. Prior research estimated the black hole was about 16 million times the mass of the sun.

The researchers analyzed this galaxy with data collected in 2013 from the Suzaku X-ray astronomy satellite, a joint venture of NASA and the Japanese space agency, JAXA. They discovered a wind from the galaxy's core that starts off traveling at about 30 percent the speed of light, or about 200 million mph (323 million km/h). The scientists estimate a giant amount of gas equal to about 1.5 times the mass of the sun flows in this wind per year.

Using infrared data from the European Space Agency's Herschel Space Observatory, the investigators saw that as this black hole wind progressed outward nearly 1,000 light-years, it slowed to about 2.2 million mph (3.6 million km/h). At the same time, it swept up an additional 800 suns worth of gas per year and pushed that material out of the galaxy. The researchers calculated that about 20 percent of the power of the wind near the black hole propels this larger outflow.

Astronomers had previously detected winds very close to black holes using X-ray telescopes and had also seen much larger outflows of gas through infrared observations. But this is the first time scientists have detected both the close-in winds and the outflows of gas in the same galaxy.

"Other galaxies were either too faint in the infrared or X-rays, or there was too much gas obstructing our view of the central regions," Tombesi said.

Prior studies had suggested another possible cause of these giant outflows was energy from star formation near the galactic center. However, this new research argues the brightness of the active galactic nucleus of IRAS F11119+3257, which is responsible for about 80 percent of the galaxy's overall radiation, means that star formation alone could not explain all this radiation. This result led the scientists to conclude that black hole winds are responsible.

By detecting the flow of material out of one supermassive black hole from the smallest to largest scales, this finding helps capture a complete view of how such a wind can strip a galaxy of its star-making gas.

"The supermassive black hole is sucking interstellar gas, but at the same time it is affecting the star-formation history of the galaxy with its powerful winds," Tombesi said. "Astrophysicists describe this process as a feedback between the central supermassive black hole and the galaxy, which on very long timescales regulates their co-evolution."

The investigators have so far seen this phenomenon in only this one galaxy. However, now that they have a better idea what they are looking for, they said they will be able to find more candidate galaxies in the future.

In early 2016, JAXA and NASA are scheduled to launch ASTRO-H, a successor satellite to Suzaku, and instruments aboard this probe will make it possible to study more galaxies like IRAS F11119+3257 in greater detail.

"These are not like normal spiral or elliptical galaxies. They're like train wrecks," said study co-author Sylvain Veilleux, at the University of Maryland, College Park. "Two galaxies collided with each other, and it's now a single object. This train wreck provided all the material to feed the supermassive black hole that is now driving the huge galactic-scale outflow."

The scientists detailed their findings in the March 26 issue of the journal Nature.