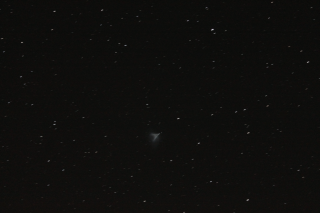 A mysterious cloud that glowed in the night sky above the Atlantic Ocean on the night of March 12 was actually a spray of unused rocket fuel, released following a launch from Cape Canaveral Air Force Station, Florida.

Keen-eyed skywatcher Scott Gauer sent us this photograph of the glowing fuel cloud — which appears as a small fan of light in the sky — from Danville, Pennsylvania. The fuel came from an Atlas V rocket launched by NASA and carrying four satellites that make up the Magnetospheric Multiscale mission, or MMS, a science experiment that will study energetic events in Earth's magnetic field.

Reports of the possible fuel dump sighting appeared earlier in the day on March 12.

The Atlas V rocket, built by United Launch Alliance, consisted of a single payload fairing carrying the MMS experiment, which comprises four satellites; two boosters; and a single-engine Centaur upper stage, which is what dumped the fuel. News of the fuel dump first came to Space.com from reporter Joe Rao, who learned about it from Cees Bassa, who posted a message about it on the SeeSat-L mail list.

The MMS mission consists of four satellites that will study a phenomenon called magnetic reconnection in Earth's magnetic field. This explosive phenomenon is a key driver of space weather, which includes solar storms, coronal mass ejections, geomagnetic storms and the auroras near the north and south poles.

The four satellites were released from the rocket at 5-minute intervals, beginning roughly 90 minutes after launch. The satellites will orbit together in a pyramid formation, which will allow them to collectively study magnetic reconnection over a three-dimensional region.

In 2004, another rocket fuel dump was visible at night over the eastern United States and Canada. Many observers were surprised by the appearance of that "mystery cloud."