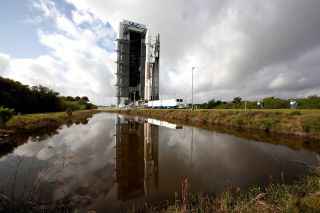 NASA's Magnetospheric Multi-Scale mission satellites and their Atlas V rocket are rolled out to the launch pad at Florida's Cape Canaveral Air Force Station ahead of a planned March 12, 2015 launch.
(Image: © NASA/Kim Shiflett)

The potential sky show will be the artifact of NASA's Magnetospheric Multi-Scale mission (MMS), which is set to blast off from Florida's Cape Canaveral Air Force Station atop a United Launch Alliance Atlas V rocket at 10:44 p.m. EDT Thursday (0244 GMT Friday). You can watch the MMS satellite launch live on Space.com, courtesy of NASA TV.

The mission will fly four identical satellites in a pyramid formation, studying how the sun's magnetic field merges with that of Earth, explosively converting magnetic energy into heat and kinetic energy. [NASA'S Magnetospheric Multiscale Mission in Pictures]

The night launch of the Atlas V should be a spectacular sight for those living within a few hundred miles of Cape Canaveral. Unfortunately, however, the trajectory of the rocket will take it almost straight east, out over the Atlantic Ocean, so those living farther north along the Atlantic seaboard will not be able to see it as it moves up into space.

The rocket will appear very low along the south-southeast horizon, as seen from the Georgia or South Carolina coast. Farther north, it will not be visible at all because the rocket will never rise above the horizon.

But skywatchers around the continent should be on the lookout for a dump of liquid hydrogen and liquid oxygen fuel, which should come approximately 2.5 hours after the launch and could produce a memorable skywatching sight, weather permitting.

The alert for the potentially visible MMS fuel dump comes from Cees Bassa, an assiduous observer of artificial satellites who is based in the Netherlands and who posted a message on the SeeSat-L mail list.

The four MMS satellites are due to be released at roughly 5-minute intervals beginning 90 minutes after liftoff.  After the fourth and final satellite is released, Bassa thinks that the Atlas V's Centaur second stage may not be deorbited, but may rather be placed into an orbit around the sun. But for either possibility, Bassa said, "it is expected that the Centaur will perform a Contamination and Collision Avoidance Maneuver (CCAM), followed by the dumping of the remaining fuel."

Bassa added: "The fuel dump (should start) within minutes of the end of the CCAM. The whole issue with
this is that the last separation occurs either shortly before, or after entry into the Earth's shadow, so the start of the fuel dump may be invisible. I would expect though that the fuel cloud will become
visible after shadow exit." [Best Night Sky Events for March (Sky Maps)]

The fuel dump is visible by virtue of reflected sunlight; if it occurs within the Earth's shadow, then no sunlight can reach it and the cloud would be rendered invisible.

Depending on exactly when the Alas V takes off (there is a 30-minute launch window, which begins at 10:44 p.m. EDT), any prospective cloud created by a fuel dump might become visible as it exits the Earth's shadow.

As to where to concentrate your gaze, based on the projected launch vehicle/spacecraft ground track, the end of the CCAM should occur over the Caribbean Sea near the Netherland Antilles at an altitude of 43,600 statute miles (70,167 kilometers).

At such an altitude, the resultant cloud should be evident across much of North America. It should appear very high in the south-southeastern sky. In the past, similar fuel dumps initially have appeared as a point of light that resembled a bright star seen through fog, or the moon behind clouds. Quickly, it expands into a large circular or spiral cloud that gradually fades from view after a number of minutes.

On Aug. 31, 2004, a similar fuel dump took place during the evening hours over the eastern U.S. and Canada that took many by surprise. Here at Space.com, we dubbed it the "mystery cloud."

Once again, the visibility of the luminous cloud created by the Centaur stage fuel dump is dependent on the time the Atlas V is launched from Florida as well as the timing of the Contamination and Collision Avoidance Maneuver after the four satellites are released, and finally, the emergence of the fuel dump into full sunlight after being hidden in the Earth's shadow.

Editor's note: If you take an amazing photo of the MMS launch or any other night-sky sight that you'd like to share for a possible story or image gallery, please contact managing editor Tariq Malik at spacephotos@space.com.

Joe Rao serves as an instructor and guest lecturer at New York's Hayden Planetarium. He writes about astronomy for Natural History magazine, the Farmer's Almanac and other publications, and he is also an on-camera meteorologist for News 12 Westchester, N.Y.Follow us @Spacedotcom, Facebook or Google+. Originally published on Space.com.