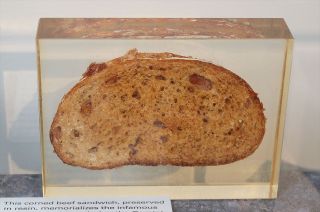 A corned beef sandwich, embedded in acrylic, is exhibited at the Grissom Memorial Museum in Mitchell, Ind., to "memorialize the infamous sandwich" on Gemini 3.
(Image: © Raymond K. Cunningham, Jr. via collectSPACE.com)

Just about two hours into the flight of Gemini 3, NASA's first two-man space mission 50 years ago Monday (March 23), pilot John Young reached into his spacesuit's pocket and pulled out a surprise.

"Where did that come from?" Gus Grissom, the mission's commander, asked his crewmate.

"I brought it with me," Young replied, somewhat matter of factly. "Let's see how it tastes. Smells, doesn't it?"

What Young revealed was the world's first — and possibly last — corned beef sandwich to fly in space.

The sandwich was a joke, although not everyone learning of it later would laugh. Grissom's fellow Mercury astronaut Wally Schirra, who had a reputation for pulling pranks (he called them "Gotchas"), had purchased the sandwich from Wolfie's Restaurant and Sandwich Shop at the Ramada Inn in Cocoa Beach two days earlier. He handed it off to Young the morning that Gemini 3 launched atop a Titan II rocket from Cape Canaveral's Pad 19 in Florida.

NASA planned the Gemini missions in order to learn how to send astronauts to the moon. The program, which saw 10 crewed spaceflights between 1965 and 1966, featured America's first spacewalk and the world's first rendezvous and docking between spacecraft.

Gemini also evaluated the types of food astronauts would consume on increasingly-longer missions. [The Evolution of Space Food in Photos]

"It's breaking up. I am going to stick it in my pocket," said Grissom after taking a bite.

"It was a thought, anyway... not a very good one," Young replied, defeated. "Pretty good though, if it would just hold together."

Crumbs were the concern. In the weightless environment of space, they could find their way behind electrical panels or fly into a crewmember's eye. NASA's Gemini 3 press kit described how a gelatin layer was added to food items to avoid just such a problem.

"The [bite size items] are coated to prevent crumbing," the kit stated.

Of course, the contraband corned beef sandwich had no such outer layer, as Grissom was quick to discover.

"I took a bite, but crumbs of rye bread started floating all around the cabin," he explained in an interview with LIFE magazine soon after the mission.

The entire corned beef sandwich "taste test" lasted about 10 seconds out of the 4 hours and 52 minutes that Gemini 3 was in flight. The mission otherwise tested the capsule's orbital maneuvering thrusters, setting a first for a crewed spacecraft. [Learn more about the Gemini missions]

"I must admit that as test pilots John and I were not quite as fascinated by sea urchins and sandwiches as we were the chance to carry out some real 'firsts' in space flight," Grissom told LIFE, referencing the smuggled corned beef as well as an experiment to fertilize marine animal eggs. "We pulled off a couple of good maneuvers along those lines."

Still, the news of the deli delivery in space fascinated the public — and caught the ire of Congress.

"A couple of congressmen became upset, thinking that, by smuggling in the sandwich and eating part of it, Gus and I had ignored the actual space food that we were up there to evaluate, costing the country millions of dollars," Young wrote in his 2012 memoirs, "Forever Young."

The House of Representatives' appropriations committee convened a meeting to investigate the sandwich scandal.

"My thought is that ... to have one of the astronauts slip a sandwich aboard the vehicle, frankly, is just a little bit disgusting," Representative George Shipley of Illinois said to NASA administrator James Webb, associate administer for manned spaceflight George Mueller and Robert Gilruth, director of the Manned Spacecraft Center (now Johnson Space Center) in Houston.

"We have taken steps ... to prevent recurrence of corned beef sandwiches in future flights," Mueller replied.

The original Wolfie's, from which Schirra bought the now infamous corned beef closed in 2002, having never seen another of its sandwiches fly into space.

True to Mueller's word, no unauthorized deli meats made it to orbit, or the moon, in the years that followed Gemini 3. Bread however, did fly in the form of bite-size cubes (and the occasional loaf) and corned beef made it officially onto the menu in time for the first space shuttle flight in April 1981 — a mission commanded by John Young.

For his part though, Young felt the sandwich got far more attention than it deserved, at the cost of highlighting his and Grissom's successful start to the Gemini program.

"[Gemini 3] was a truly excellent engineering test flight of the vehicle," he wrote in 2012.

Besides, noted Young, the smuggled sandwich didn't even have mustard on it. "And no pickle."

Click through to collectSPACE.com to see the Gemini 3 emblem, produced as a patch after the mission.