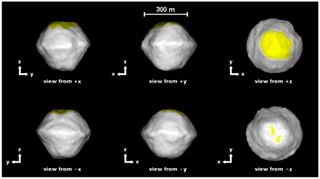 A shape model of the near-Earth asteroid 2008 EV5, which is the leading target for NASA's Asteroid Redirect Mission.
(Image: © Courtesy Caltech, Arecibo Observatory, and NASA/JPL)

The big asteroid 2008 EV5 may end up giving a piece of itself in the name of science and exploration.

NASA intends to pluck a boulder up to 13 feet (4 meters) wide off a near-Earth asteroid and haul it into orbit around the moon, where astronauts could visit and study the rock beginning in 2025. NASA announced the boulder plan on Wednesday (March 25), and unveiled a new video of how astronauts would fly the asteroid mission.

Agency officials haven't decided upon the target asteroid yet, but the leading contender at the moment is the 1,300-foot-wide (400 m) 2008 EV5. While 2008 EV5 has never been visited by a spacecraft, it has been observed extensively using infrared telescopes and planetary radars, such as the dishes at NASA's Goldstone facility in California and the Arecibo Observatory in Puerto Rico, NASA officials said. [NASA's Asteroid-Capture Mission in Pictures]

"Its orbit is very well known," Lindley Johnson, program executive of NASA’s Near Earth Object Program, told reporters during a news conference on Wednesday. "We have a very good idea of its size, shape, its spin dynamics and the potential existence for the right-sized boulders on the surface."

As its name suggests, 2008 EV5 was discovered in 2008, by the Catalina Sky Survey in Arizona. The asteroid lies slightly closer to the sun than Earth does, taking 343 days to complete one orbit around our star.

2008 EV5 is roughly spherical, though it does possess an equatorial ridge that lends the space rock a distinctly muffin-like aspect. The asteroid also features a 500-foot-wide (150 m) concavity that is most likely an impact crater, according to a 2011 paper in the journal Icarus led by Michael Busch of the SETI (Search for Extraterrestrial Intelligence) Institue in Mountain View, California.

The observations of Busch and his team — made in December 2008 using Goldstone, Arecibo and the Very Long Baseline Array in New Mexico — suggest that 2008 EV5 should have plenty of boulders for a visiting probe to choose from.

"Our highest-resolution radar images of EV5 have resolution ~7.5 m. At that resolution, we see several blocks/boulders that we didn't resolve. So we know that there are < 10 m boulders on EV5's surface," said Busch, who was based at UCLA at the time of the study.

"Based on the radar scattering properties of EV5's surface, we also know that there are numerous ~10 cm cobbles," Busch told Space.com via email. "On all asteroid surfaces that have been observed by spacecraft, where there are large blocks and small cobbles, there are also boulders of intermediate sizes. So we infer that there are many boulders on EV5 in the few-meter size range that the ARM [Asteroid Redirect Mission] spacecraft would be able to return from the asteroid to Earth-moon space."

2008 EV5 is a Type C, or carbonaceous, asteroid, Johnson said. Such space rocks — the most common type in the solar system — are very dark, generally reflecting just 3 to 9 percent of the sunlight that hits them.

Carbonaceous asteroids generally harbor significant amounts of water, in the form of hydrated minerals. Because water can be split into hydrogen and oxygen, the constituents of rocket fuel, the asteroid-mining firm Planetary Resources regards Type C asteroids as the best initial targets for resource exploitation.

As currently envisioned, NASA's $1.25 billion Asteroid Redirect Mission would launch a robotic probe toward a space rock in December 2020. The craft would rendezvous with the asteroid in 2022, grab a boulder, and then spend 215 to 400 days circling the larger object to test asteroid-deflecting "gravity tractor" strategies.

The probe would then lug the boulder to lunar orbit by late 2025, at which point it could be visited by astronauts using NASA's Orion capsule and Space Launch System megarocket.

While 2008 EV5 is the leading asteroid target at the moment, it's not the only one. Two other space rocks — Itokawa and Bennu, both of which are about 1,640 feet (500 m) wide — are also possibilities, and NASA officials expect to identify one or two additional viable candidates per year leading up to launch.

"We don't have to make a decision on what asteroid we're going to until roughly a year before the launch, so somewhere in 2019," said NASA Associate Administrator Robert Lightfoot.